Last year the restaurant industry lost over $240 billion in sales, and that decline is continuing into 2021. These tech entrepreneurs are hoping to change that for Black-owned businesses, though.

Due to the risk of spreading COVID-19, restaurants have had to depend on food delivery service apps to help them stay afloat. And while large companies like Uber Eats, Grubhub and Doordash dominate most markets, smaller startups like Eat Okra and Black and Mobile are emerging to support Black restaurateurs specifically.

And they need the help. Restaurants here in Atlanta have been affected severely by pandemic-driven losses in sales.

“Business has ground to a halt,” said Jeremiah “Jay” Terrence, Jr. Sales at his food truck business, Triple Jay’s Pizza, is down a staggering 98 percent. The truck is currently parked, and his midtown brick-and-mortar location is hanging on by a thread.

Fostoria “Fossy” Dumas, owner of Hott Chixx Wings on Campbellton Rd., also says she has to adjust to the lack of customers dining in on a regular basis. “We had a big lunch crowd and the pandemic basically took our lunch crowd out,” she says.

But there is help on the digital horizon. Janique Edwards and her husband Anthony had the idea for Eat Okra back in 2017 when they wanted to support Black-owned businesses while living in Brooklyn, NY. Using the okra seed enslaved Africans brought to the Americas as inspiration, the couple created the app to help people find restaurants like Triple Jay’s and Hott Chixx all over the U.S.

Edwards explains their app is a food directory to help you find Black-owned restaurants and connects you to food delivery services to come right to your doorstep.

“We developed Eat Okra because we wanted to create a unique way for people to support Black businesses,” said Edwards. The app has over 500 restaurants listed in Georgia, and 150 of them are in the Atlanta metro area alone.

With Eat Okra, Edwards connects customers to another app that delivers from only Black-owned restaurants, Black and Mobile.

When David Cabello was delivering food for Postmates with his twin brother Aaron in their hometown of Philadelphia, he quickly realized that he could be making a lot more money if he owned the business instead of delivering for them. Black and Mobile was born. 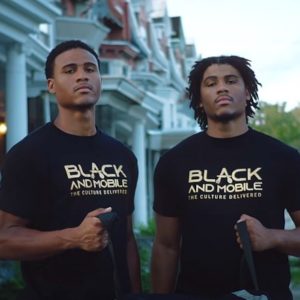 Using Cabello’s app, you can get some of your favorite dishes from some of your local Black-owned restaurants within a ten-mile radius.

After building a market in Philadelphia, then Detroit, Black and Mobile started delivering in the Atlanta area in July and it has quickly become one of its fastest-growing markets.

Deyanna Reed is Black And Mobile’s highest volume vendor here in Atlanta. Her “addictive” candy-coated fruit business, The Craxk House, in Decatur has seen a boom in orders after signing up with Black and Mobile earlier this month.

“I was trying to keep my expenses low,” said Reed, “and then I found out about Black and Mobile and how they deliver up to ten miles from our store location and I was like, let me try them out.”

The businesses that participated with both apps saw an influx of support during the social injustice that occurred after the death of George Floyd, Breonna Taylor, Ahmaud Abrey and Rayshard Brooks here in Georgia.

That social climate was one reason why Dumas decided to make Black And Mobile their exclusive food delivery service.

“I just feel that just to support Black businesses, a lot of other corporations don’t need Hott Chixx as their customers, but it may be crucial for Black And Mobile with Hott Chixx,” Dumas said.

This sense of community has also bolstered Eat Okra’s customer base.

“Eat Okra had made online visibility for a lot of Black-owned restaurants way simpler during a time when the need for a strong digital presence was critical,” said Edwards. “For those who always understood and those just exploring the idea of what it means to be an intentional supporter, Eat Okra is a great place to meet and bond over food.”

Hollywood has also noticed Black And Mobile. Cabello, 25, was featured in Pharrel featuring Jay-Z latest music video, Entrepreneur, which was hard for him to believe.

“I didn’t believe it until it aired honestly,” said Cabello, “because someone just emails you about being featured in a Jay-Z video, you’re like, come on, man, I’m not a rapper.” 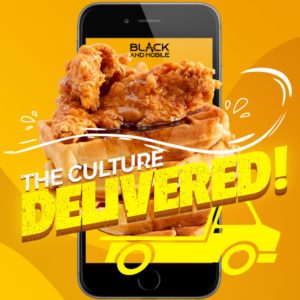 Eat Okra is always looking to add more Black-owned restaurants to its directory. To find out more about joining their list, check out their website. Additionally, Black and Mobile is looking for more drivers. To find out how to join their team or have them deliver for your restaurant, contact them to find out more.