Those who are desperately straining to see improvements in Atlanta’s local economy may want to skip Mayor Kasim Reed’s budget proposal, or at least limit their view to a few bright spots.

Atlanta Mayor Kasim Reed includes some grim economic forecasts in his proposed budget for the fiscal year that begins July 1.

Bright spots include revenue from business licenses, which is forecast to rise a bit as business income increases. The hotel/motel tax is expected to rise modestly as the business and tourism trade holds on. In addition, Atlanta expects to hire rather than lay off employees, with a third of the new positions to be located in the executive offices that report directly to the mayor.

The Atlanta City Council issued a statement Monday reminding that the council’s Finance Committee will conduct a public hearing and virtual town hall on the proposed $539 million budget May 16 at 6 p.m. in the council chamber. More information is available on the council’s website.

Reed’s budget proposal, for the fiscal year starting July 1, makes it clear that there’s just no getting around the sluggish economy. Various entries also make it clear that good news is tempered by bad news, and vice versa.

For starters, Atlanta’s total revenues are projected to continue a decline that the budget dates to 2010 – which happens to be the year Reed took office. 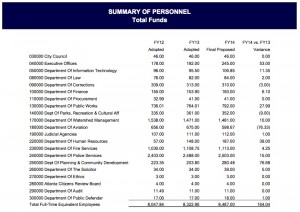 Atlanta would add 164 positions compared to the current fiscal year, in the budget proposed by Mayor Reed. Credit: City of Atlanta

Even at that, the city has based the budget on an expectation of a higher rate of tax collection. To meet the projections, the collection rate is to rise to 98 percent, up from the previous year’s collection rate of 96 percent, according to the proposed budget.

Atlanta’s property taxes are collected by Fulton County, where Tax Commissioner Arthur Ferdinand remains under scrutiny for his practice of selling tax liens quickly in order to collect property taxes. Any changes there could impact Atlanta’s revenue stream.

An example of the tempered nature of the budget appears in the area of the local option sales tax. This tax is, generally, an accurate indicator of consumer spending because the tax applies to a broad array of transactions. 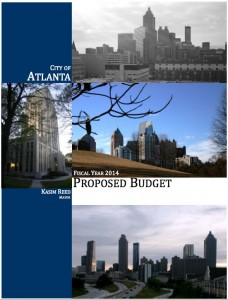 This is the cover of the budget proposal from Atlanta Mayor Kasim Reed. Credit: City of Atlanta

The main budget presentation calls for the sales tax revenue to rise by nearly 2 percent, compared to the forecasted collection of $101 million for the current fiscal year. However, the budget for the current year was $107 million, which means the $103 million in the FY 2014 budget proposal is actually a decrease of about $4 million, according to some figures at the back of the budget book.

True good news appears in the revenues forecast from general business licenses. The license fee is based on gross receipts and employment levels, which makes it a reliable indicator of business activity in the city.

The FY2013 budget set the revenue at $37 million. Forecasted collections are running ahead of that, at $39 million. Reed’s budget locks in the gain and sets the FY2014 figure at $40.4 million.

In terms of city staff, Reed’s budget proposal calls for 8,487 fulltime equivalent employees. That figure represents an increase of 164 positions compared to the current year, according to the budget.

Of the new positions, 53 would be assigned to the executive offices, which are comprised of the offices of mayor, chief of staff, and chief operating officer. No additional staff is proposed for the Atlanta City Council.

The proposed staffing represents an increase of more than 5 percent since 2012, when the city’s staff was listed as 8,048 FTE employees.