The Academy Awards may be turning 93, but the prize has nonetheless managed to cough up a few firsts this time around.

It’s the first time two – count ‘em, two!!!!!!! – women have been nominated for Best Director in the same year. The total number of women ever nominated in the category is a rousing five and one – count her!!! – has won (Kathryn Bigelow for “The Hurt Locker” in 2008).

If Chloe Zhao wins Best Director, it’ll be a first for a woman of color. 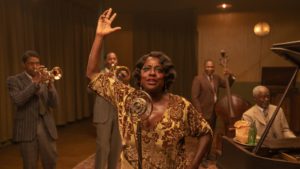 Viola Davis is the first Black woman to be nominated twice for Best Actress (She won Best Supporting Actress for 2016’s “Fences”).

For the first time, the Oscars will split the ceremony between L.A.’s Union Station and its usual venue, the Dolby Theater.

Because of the pandemic and its effect on movie theaters, for the first time, some films have been nominated that were seen on VOD, not the big screen. 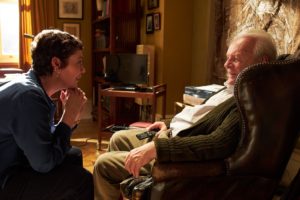 A scene from “The Father” – a best picture nominee

But no matter how many “firsts” there are, the Oscars themselves still have their own sort of built-in déjà vu. The number of nominees is relatively rigid (No more than five, with the exception of the Best Picture category which allows up to ten). The ritual of opening the envelope hasn’t wavered (even in the wake of the “LaLa Land/Moonlight” debacle in which the former was announced when the latter was the actual winner; if you missed it, look it up – really a rare moment of complete Oscar chaos). And it looks as if some form of the Red Carpet Parade is still locked in, though I can’t help but wonder what role masks will play.

Anyway, I think many of the nominees are deserving this year, especially in the Best Picture group. But I’m supposed to make predictions, so…

Best Actor: Riz Ahmed for “Sound of Metal,” Chadwick Boseman for “Ma Rainey’s Black Bottom,” Anthony Hopkins for “The Father,” Gary Oldman for “Mank,” and Steven Yeun for “Minari”
My Choice: Anthony Hopkins
Oscar’s Choice: Boseman (which is fine with me and as understandable as it is inescapable)
Should Be No One’s Choice: Gary Oldman

Best Supporting Actor: Daniel Kaluuya for “Judas and the Black Messiah,” Sacha Baron Cohen for “The Trial of the Chicago 7,” Leslie Odom, Jr. for “One Night in Miami,” Paul Raci for “Sound of Metal,” Lakeith Stanfield for “Judas and the Black Messiah”
My Choice: Sacha Baron Cohen
Oscar’s Choice: Daniel Kaluuya (again, fine with me)
Should Be No One’s Choice: They’re all deserving, though one has to question why neither Kaluuya nor Stanfield is in the Best Actor category.

A final fingers-crossed first? Maybe this year, for the first time, the Oscars will be a reasonable length. For that matter, anything under three hours would be a real breath of fresh air.

And just in case you’re wondering, the longest televised Oscar show ever was the 74th annual edition in 2002. It weighed in at a hefty four hours and twenty-three minutes. Lord help us all.

Note to readers: To make your own picks, here is a link to download and print your own ballot of 2021 Oscar nominees.