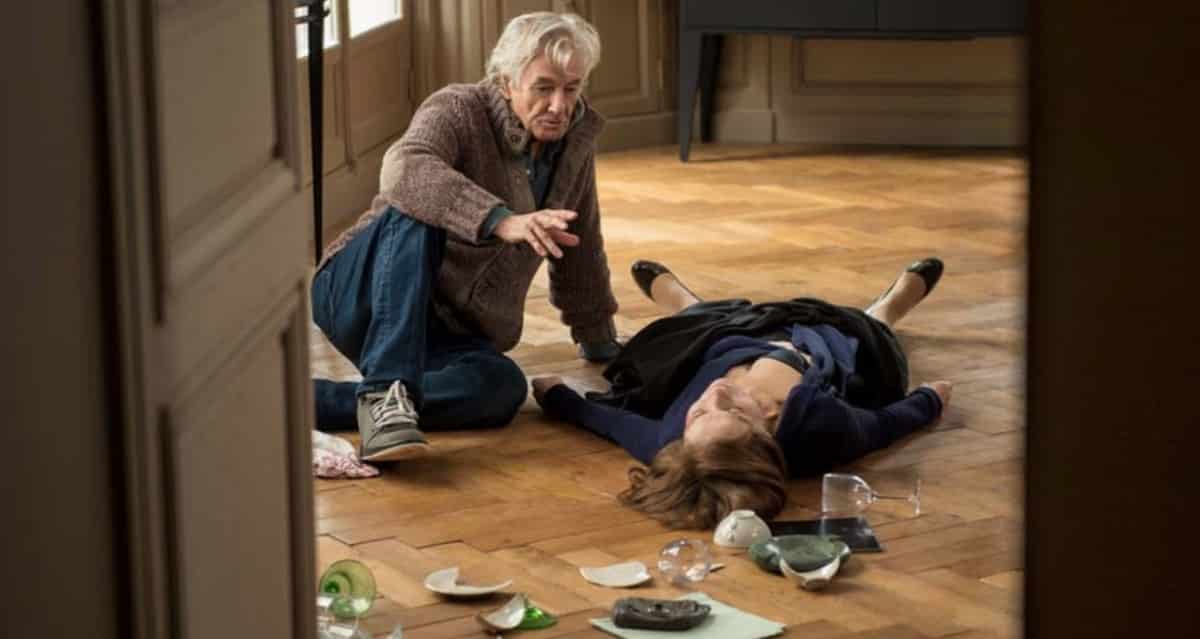 If her recent win at the Golden Globes – beating the likes of Natalie Portman and Amy Adams – hinted at how amazing Isabelle Huppert is, wait until you see “Elle.”

It begins with off-screen sounds: Breaking glass, a female voice in some sort of distress. Then we see a cat, its eyes passive and opaque. And then we see what’s happening. A woman (Huppert) is being raped by a masked intruder. In her own home. In broad daylight. 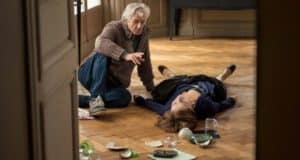 ‘Elle’ is the powerful outcome of collaboration by Isabelle Hubert and director Paul Verhoeven. Credit: waytooindie.com

Her name is Michele Leblanc. She is the self-sufficient CEO of a video-game company that specializes in repulsively brutal scenarios. And she has the sangfroid of someone ordering a deadly drone strike half a world away.

After the rapist leaves, she calmly sweeps up the broken china takes a bubble bath and orders sushi takeout (“What is a holiday roll?” she asks). The next day, she goes to the doctor to check for STD and buys a small hammer, which she puts under her pillow.

She does not call the police.

The more we get to know her – and that, really, is what this psychological thriller/character study is all about – the more sense her actions make. To say Michele is one cool customer is like calling 9/11 a bad day in Manhattan.

She doesn’t have the strongest support group. Her son is a clueless lunkhead, fooled by a manipulative vixen into thinking he’s the father of her child (her objective: Free room and board).  Her ex-husband is a failure who hopes to get one of his ideas made into a video game (by Michele’s company, of course).  Her mother is an embarrassing vamp who has sex with hunks-for-hire half her age.

And her mostly male, certainly younger employees clearly resent her, claiming her background is too “literary” (read, too old) to effectively understand game design. Yet it’s Michele who insists a disgusting game in which a multi-tentacled alien rapes a helpless maiden isn’t nasty and, well, rape-y enough.

Michele does have one good friend with whom she co-founded the company. Said friend is worried that her husband is having an affair. He is – with Michele. 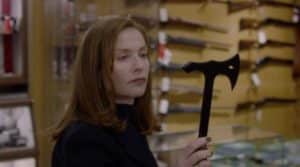 In ‘Elle,’ Isabelle Hubert delivers a tour-de-force performance that stands as well as that for which she beat Natalie Portman and Amy Adams to win a Golden Globe award. Credit: cinefilesreviews.com

The rapist returns.  He also leaves her ugly, sexually threatening notes. Like a mouse turning the tables on a cat, she determines to find out who he is.

“Elle” is anything but a conventional Hollywood movie. The assault isn’t in the least titillating; in fact, during another attack, when Michele tries to be compliant – she finds out his identity early in the film – it’s a turn-off. He can’t get it up unless it’s a power trip in which she is an unwilling victim.

But don’t expect a revenge movie a la Jodie Foster. Or a lesson in female empowerment. Or a celluloid sermon about a victim trying to pull her life back together after unspeakable violation.

“Elle” is something totally original – a hugely disturbing picture that, at the same time, can be mordantly funny. The director is Paul Verhoeven, a master of provocation (“Basic Instinct,” for one). He’s also an expert at combining outrage and, well, darker-than-dark humor (“Starship Troopers”).

However, while he may give the film its heedless – and quite self-aware – cruelty, he’s not the one in charge here. Rather, “Elle” is an impeccable example of what could be deemed actor-as-auteur.  The movie is unimaginable without Huppert. Her performance is fearless, complex and utterly unpredictable. Even if you already know how extraordinary Huppert is – she’s been around since the late ‘70s – her work here will leave you breathless.

Verhoeven may be in the director’s chair, but Huppert is clearly in the driver’s seat.

You really should see this movie.