Editor’s note: This story has been updated to eliminate the former final paragraph, which contained incorrect information.

The high-stakes battle to build a hospital in Georgia’s most-populated county without one faces new hurdles, just two months after the state Supreme Court gave a green light for the project in Columbia County that’s been in litigation since 2014. 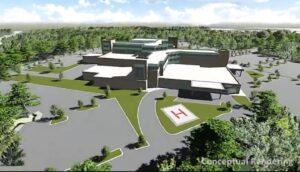 The hospital planned in Columbia County by AU Health System, Inc. is to provide a helicopter landing pad, which will enable patients to be air lifted to and from the facility. Credit: augustahealth.org

The court’s June 1 ruling in a case filed against Georgia’s health regulator denied the final appeal by an affiliate of HCA, a Tennessee-based health services company with a market cap of $77.79 billion. HCA’s Augusta affiliate fought to overturn a ruling that denied it a state permit to build a hospital in Columbia County, a county with a growing population of fairly affluent residents.

The new challenges are a credit downgrade, coupled with a negative outlook, issued to the entity that won the right to build a 100-bed hospital in Columbia County – Augusta University Health System, Inc. 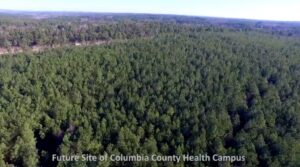 The coronavirus pandemic played a role in the downgrade, as analysts observed patient volume had dropped while expenses remained high. A positive sign for the health system exists in the form of a “seasoned management team” that will work with outside consultants to balance the budget. Analysts indicate the near term financial outlook is precarious:

Analysts noted in the ruling that the decision by the Georgia Supreme Court does clear the path forward for AU Health System to develop a hospital in Columbia County. However, the rating action notes that the financing plan for the planned hospital, along with maintenance of existing facilities, remains uncertain: 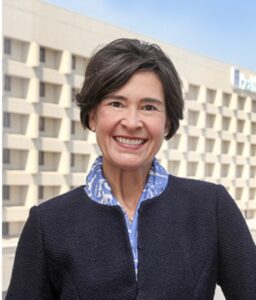 The battle that started in 2014 involved an effort to build a hospital in the fast-growing, and affluent, Columbia County, located along Richmond County’s northwest border. Household income was estimated at above $80,000 a year, according to a 2019 Census estimate.

The situation involved one of the nation’s larger hospital systems, HCA, and its facility in Augusta, Doctors Hospital. Doctors Hospital sued to overturn the 2014 ruling from the Georgia Department of Community Health that awarded a Certificate of Need to AU Health System, which is the teaching hospital of the Medical College of Georgia and is located on the campus of Augusta University.

Previous Article
Safe to swim? Georgia’s rivers should be clean enough to play in the water
Next Article
Atlanta City Council asked to vote on public safety center despite unknowns