The rooftop of Emory University's Gambrell Hall is covered with solar panels that are among the first of more than 15,000 solar panels Cherry Street Energy is to install on Emory's Druid Hills campus. Credit: Michael Chanin via zoom.us

Emory University’s decision to install more than 15,000 solar panels exemplifies the leadership role universities are able to take in the global effort to reduce greenhouse gas emissions, the founder of the company working on Emory’s project said Wednesday. 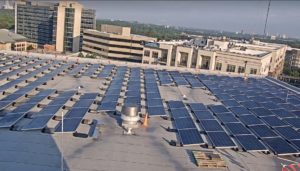 The rooftop of Emory University’s Gambrell Hall is covered with solar panels that are among the first of more than 15,000 solar panels Cherry Street Energy is to install on Emory’s Druid Hills campus. Credit: Michael Chanin via zoom.us

“Universities can go first, because universities have risk appetites other institutions don’t have,” Michael Chanin, CEO and founder of Cherry Street Energy, said during a webinar.

The installation is to position Emory among the top universities in the South in terms of its solar capacity, according to remarks in a May 12 statement by Ciannat Howett, Emory’s associate vice president of Resilience, Sustainability and Economic Inclusion.

“Through this project, Emory will have one of the largest deployments of on-site solar power at a higher education institution in the Southeast,” Howett said.

The initiative is a major achievement during Howett’s term in office at Emory. Howett joined Emory as its first director of sustainability initiatives in 2006, following her work as director of the Southern Environmental Law Center’s Georgia and Alabama office, according to a statement.

Looking to future job creation, Chanin highlighted one sector that’s not often mentioned when the industry reports the number of jobs available, many of which involve installation: high tech wunderkinds. 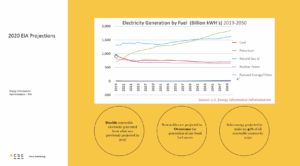 Future jobs in the renewable energy sector include computer programs who can mine sources for information that can be used to set prices, according to Michael Chanin, founder and CEO of Cherry Street Energy. Credit: Michael Chanin via zoom.us

The industry will need plenty of firepower to help set prices. Evidently, specialized programming skills will be in demand. Chanin said the job pitch might go like this:

Emory’s commitment to the solar component at its Druid Hills campus envisions the campus reaching net zero greenhouse gas emissions by 2050. In a step leading to net zero, Emory intends to reduce emissions by 45 percent by 2030. The goal complies with the 2015 Paris Agreement on global warming by limiting the addition of greenhouse gases to the atmosphere. Hence the name, net zero.

Terms call for a 20-year agreement, with Cherry Street to install 5 megawatts of solar generation across the campus. The deal is authorized under the state’s 2015 law that allows private investors to own, install and maintain solar arrays. 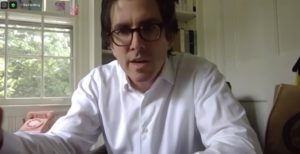 Chanin said Emory’s solar commitment has provided a degree of comfort to other property owners considering a major solar installation. He said callers will remark on Emory’s decision and say it affirms the viability of privately produce solar energy in Georgia.

Chanin delivered his remarks at Emory Climate Talks, a weekly program conducted in partnership with the Resilience and Sustainability Collaboratory and the university’s Department of Environmental Sciences. The subtitle of the seminar states: “The built environment of the future will incorporate renewable power on every structure that can support it. Here’s to the builders.”

Previous Article
SPLC to invest up to $30 million in voter registration, mobilization in the South
Next Article
Blank Foundation awards $470,000 in grants to combat systemic racism