By David Pendered
The two-story pedestrian bridge that’s to link Emory University Hospital Midtown and the Winship Cancer Institute of Emory University contains flourishes that add visual texture to a bridge with the main purpose of easing access for cancer patients. 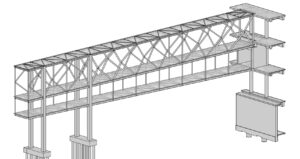 A series of geometric shapes is to add texture to the view of the two-story pedestrian bridge that’s to connect Emory University Hospital Midtown with the Winship Cancer Institute of Emory University. Credit: Atlanta

Viewers of the bridge will see a truss with geometric shapes that form archways on the upper level and, on the lower level, vertical beams that tie into the arches and bring them visually to the base of the bridge. The bridge is to be built within site of Peachtree Street.

The truss on the top floor appears to be to be comprised of a series of triangles and quadrilaterals that spread the load along the length of the structure. The four-sided shapes appear in areas where the triangles do not connect in the X-shape that’s common on railroad bridges.

The lower level of the bridge has no such geometric shapes. The load is supported solely by a series of vertical beams, according to drawings included in the paper adopted by the Atlanta City Council.

The utilitarian purpose of the bridge is to provide shelter from weather and protection from traffic to patients and health care providers as they transit between the hospital and the cancer treatment center that’s under construction, according to the legislation. 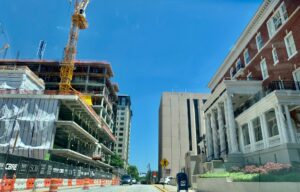 Atlanta has approved a request from Emory University Hospital Midtown for permission to build a two-story bridge over Linden Avenue, to connect the hospital with the Winship Cancer Institute of Emory University that’s now being built. Credit: Kelly Jordan

Without the bridge, patients and health care workers would have to pick their way through traffic to cross Linden Avenue, which is a route from the Downtown Connector to Peachtree Street and Piedmont Avenue.

As Dr. Walter Curran, Jr., the former executive director of Winship, said in a 2019 presentation:

At Emory Hospital Midtown, Emory needed the city’s approval of an encroachment agreement to allow the bridge to cross a city street. Emory is to pay all construction costs and the cost of maintaining the pedestrian bridge, according to the legislation. The application fee is $1,300 and the annual fee to inspect the bridge is $100.

The aesthetics of the planned pedestrian bridge are relevant as the city seeks to ensure the architectural integrity of new projects throughout the city, and has focused attention in the Midtown area. 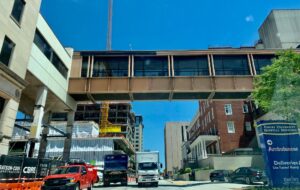 This existing pedestrian bridge at Emory University Hospital Midtown, which crosses over Linden Avenue, is bereft of architectural flourishes that may capture the eye. Credit: Kelly Jordan

The biggest example of the city’s involvement in design standards in Midtown has been the plans for a hotel. The developer agreed to retool the design in 2018 at the behest of the city. The goal was to comport with the city’s vision for developments at the intersection of Peachtree Street and Ponce de Leon Avenue.

Meantime, Atlanta is advancing plans to modify the existing 10th Street Bridge, which crosses the Downtown Connector and links the Georgia Tech campus with the Midtown.

The city is in the process of acquiring land that’s need to retool the bridge into a multimodal platform that is safer and more inviting for folks traveling by foot or bicycle. The finished product won’t be the park-type of setting that was created at the Fifth Street Bridge. It is to be comparable to the 14th Street Bridge.