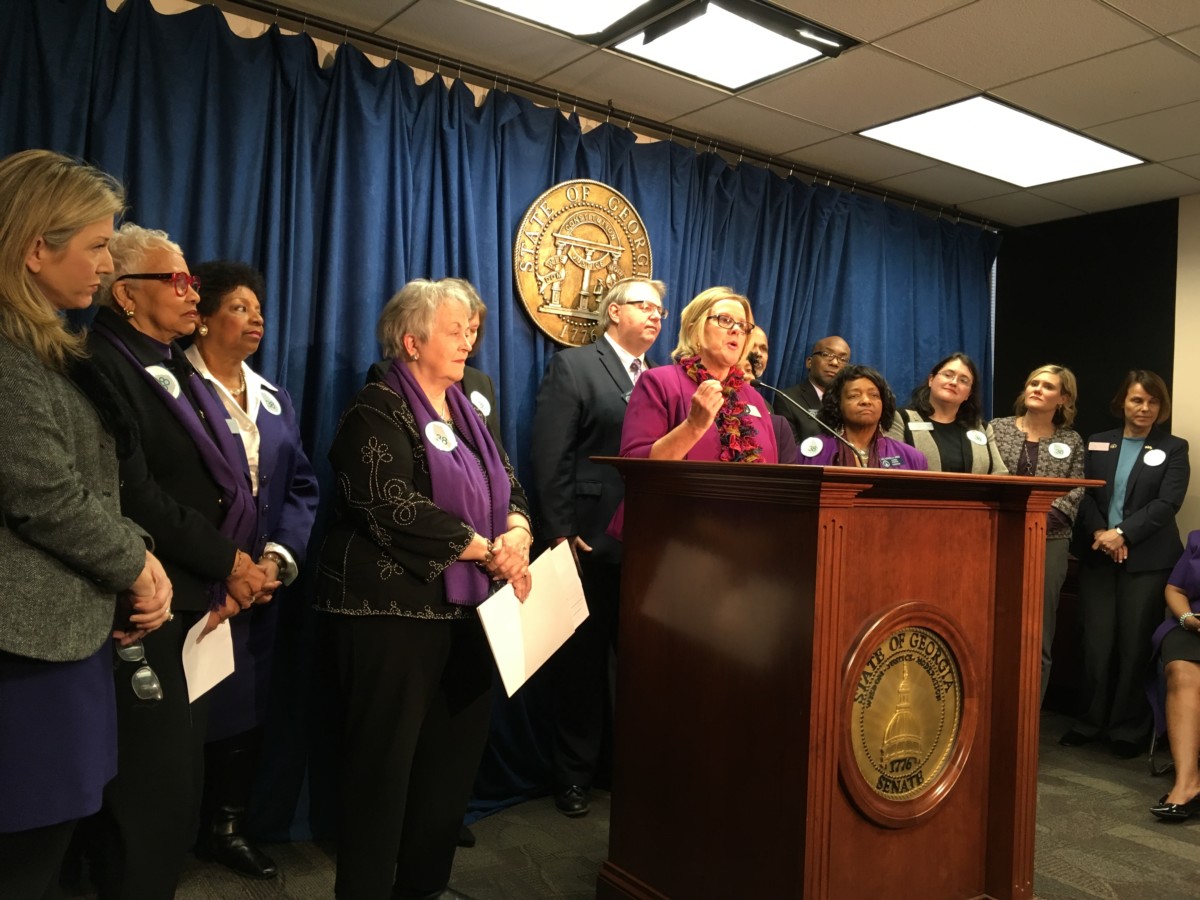 State Sens. Renee Unterman (at podium) and Nan Orrock (fourth from left), a Republican and a Democrat, who have both filed ERA legislation, spoke about their efforts at a state Capitol press conference on Wednesday. Credit: Maggie Lee

Momentum is building in the Georgia Senate to ratify the Equal Rights Amendment — about 36 years past the deadline to add equal rights regardless of sex to the U.S. Constitution. But it’s still a political statement, and it’s getting some bipartisan support. 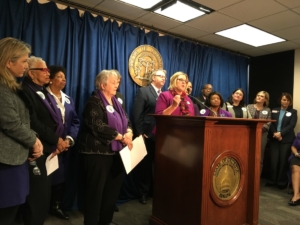 State Sens. Renee Unterman (at podium) and Nan Orrock (fourth from left), a Republican and a Democrat, who have both filed ERA legislation, spoke about their efforts at a state Capitol press conference on Wednesday. Credit: Maggie Lee

Supporters are hoping passage by Georgia — or any other state — will renew momentum for the U.S. Congress act to amend the Constitution.

The main part of the ERA text is simple: Equality of rights under the law shall not be denied or abridged by the United States or by any state on account of sex.

“It’s a pretty basic right isn’t it, a pretty basic concept that men and women should be treated equally under the law,” said state Sen. Nan Orrock, the Atlanta Democrat who’s filed a resolution that would have the Georgia Legislature ratify the ERA. Democrats in both the state House and Senate have filed such bills in previous years.

Part of what’s different lately is the interest shown by state Sen. Renee Unterman and other Republicans. The Buford Republican has turned some of her attention to the lack of females in state Senate leadership since she got booted from a powerful committee chair post earlier this year.

If it passed, she said, Georgia would become an even better state and send the world a message.

“That message is we care about all peoples’ equal rights,” said Unterman, at a joint press conference with Orrock and other ERA supporters at the Capitol on Wednesday.

Unterman has filed the same legislation as Orrock. It’s not a competing move, it’s a tactical one: Republican bills always have a better chance of attracting signatures in the majority-GOP state Senate.

As of Wednesday morning, Unterman’s bill had 22 signatures. That’s almost half the state Senate. The Republican signatures come from folks who represent places like Lawrenceville, Roswell, Alpharetta, Newnan, Jackson and Rome.  And it’s about at the same time as places like Gwinnett, Cobb and north Fulton are turning blue. 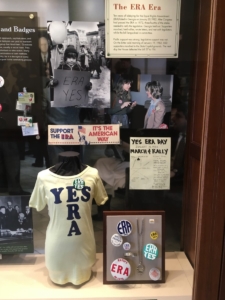 Georgia’s state Capitol doubles as a museum — an ERA exhibit shows the idea had fans the first time around, but not enough of them were in the state Legislature. Credit: Maggie Lee

Supporters are talking up the chance for Georgia to be a magic 38th state: the one that marks three-quarters of states approving ERA, the number needed to change the U.S. Constitution. That is, if some other things happen too:  Congress would need to re-open the timeline for states to ratify it, and then there’s a bit of an open legal question over some states that have revoked ratification.

Over in the Georgia state House, Rep. Billy Mitchell, D-Stone Mountain, is sponsoring an ERA resolution as well.

State Rep. Sandra Scott, D-Rex, said she thinks there’s some appetite in the House to pass the resolution because everybody knows women need to be treated equally.

“I think it would be an economic boon,” Scott said. She sees it adding to the things Georgia advertises when it tries to attract out-of-state businesses and new residents.

Her colleague, state Rep. Able Mable Thomas, D-Atlanta, said she thinks ERA could get House approval — though she said she thinks it’ll take two legislative sessions, that is, by about March 2020, to build momentum.

“I think we’re going to go from draconian to progressive,” Thomas said.

If Georgia is 38, she said, it’ll get attention across the country and the world.

By March 2020, everyone in the legislature will be thinking about elections. All 236 seats come up for election in November of that year.

Mitchell said he was once asked why a man is sponsoring an ERA bill.

“In the past, that’s who’s been standing in the way of guaranteeing equal rights for women, it’s men,” said Mitchell. “So what better legislator to sponsor such a bill to make that point, that it’s time to guarantee women equal rights?” 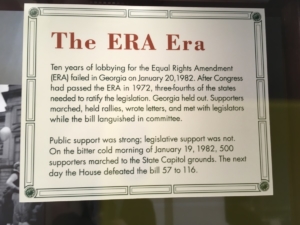 An ERA explainer at a state Capitol  exhibit: The state House voted down ERA by 57 to 116 in 1982. Credit: Maggie Lee