Georgians agree we need a healthy and dependable supply of drinking water.  We need enough water flowing in our rivers for economic and environmental reasons.

A recent turning point indicates that one pathway is no longer as appealing as it once was. 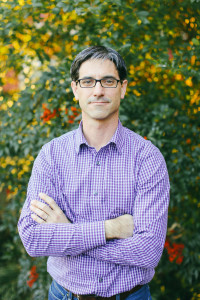 For well over two decades, decision-makers have assumed the primary tool to grow local and regional water supplies was new reservoirs.  A year ago, a half-dozen communities were actively seeking state money and a federal permit to build new reservoirs.

As of today, except for a controversial project in Paulding County, there is not a single proposal actively under consideration.  All the other major reservoir proposals in the greater Atlanta region – in Carroll, Dawson, Fulton, Hall, and Newton counties – have been “administratively withdrawn.”

What happened?  Each individual reservoir has a unique story.  But, one common element rises to the top: The consultants, state agencies and local governments promoting reservoirs relied on unrealistic population projections to justify a need for these large infrastructure schemes.  They assumed population and water supplies had to grow on parallel rising curves. 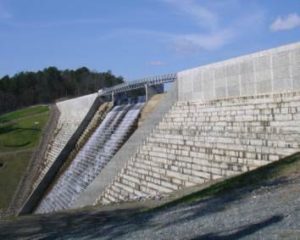 The Hickory Log Creek Dam, near Canton, was completed in 2007 to supplement the raw water supply available from the Etowah River. Credit: American River

Decision-makers – in the governor’s office and Georgia’s Environmental Protection Division – finally acknowledged those assumptions were wrong, most recently in the case of Hall County’s controversial Glades Reservoir.  In January, the state admitted the reservoir “is no longer reasonable or even viable.”  This month, after 10 years and $16 million wasted on consulting fees and a lengthy environmental impact study, Hall County put the project on pause because the need just isn’t there.

A look at North Georgia population and water-use trends illustrates why.  In short, population has increased while water use has declined.  That means that most – if not all – of the proposed reservoirs are un-needed.

For 15 years, the Newton County government pursued a plan to build a massive county-owned reservoir to serve a projected 2050 population of 400,000. But the most recent projections predict half of that amount: only 195,000 people. Local residents questioned the need for the project and what the county had to show for its $21 million investment. 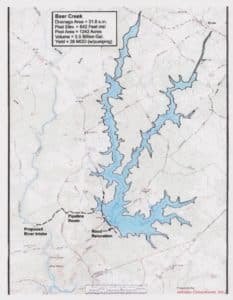 The Newton County Board of Commissioners voted in October to shelve plans for the Bear Creek Reservoir after the U.S. Army Corps of Engineers questioned population growth estimates used to justify construction. Credit: landflip.com

As questions mounted, the county’s primary water customer, the Newton County Water and Sewer Authority, conducted an independent assessment of the county’s water supply infrastructure. The results: “There is no urgency to build” a reservoir, and a, “wiser use of money is to repair/upgrade Newton County’s current treatment facilities at a fraction of the cost.”  This conclusion should not have taken local officials by surprise; in 2012, the City of Covington spent $6 million to replace 27 miles of very leaky water lines.

Facing public pressure to justify spending more taxpayer money on the reservoir planning process, Newton County commissioners voted in October to put the boondoggle on the shelf. The decision is significant for another reason: The commissioners decided to walk away from an additional $21 million state loan to build the reservoir.

In another case, aggressive population projections for the Paulding County reservoir have proven to be false. Nonetheless, the project was granted a federal construction permit in October and is on track to accumulate more than $82 million in state loans and direct investment. And the county is breaking a long-term water supply contract with Cobb County that makes this reservoir un-needed. As the project ramps up, Paulding residents should cast a doubtful eye on this expensive and unnecessary reservoir.

The Hard Labor Creek Regional Reservoir is to store about 12 billion gallons of water and was intended to serve a population boom that has not yet occurred. Credit: activerain.com

Walton and Oconee counties received $32 million from the state to build the Hard Labor Creek Reservoir.  The reservoir is filling with water, but new residents have not filled the counties. As a consequence, Oconee Countians have seen their rates increase on eight occasions, in part to pay off the county’s reservoir debt.

All of these examples serve as a warning for communities seeking a new reservoir.  That would include Athens, which floated the topic during a City Hall session on the same night last fall when Newton County commissioners turned their backs on the proposed Bear Creek reservoir.

The Georgia Water Coalition will continue to advocate for the proven strategies that ensure water supply as population grows: Repair and maintain existing infrastructure; know how much water we withdraw, consume and return; and ensure efficient usage across the board.  Reservoirs have always been, and should remain, an option of last resort.