AURORA, N.C. – The world’s largest phosphate mine and chemical plant operates in the nation’s largest lagoonal estuary. This area in eastern North Carolina bears watching as Georgia officials review a proposal to mine sand from the edge of the nation’s largest blackwater swamp – Georgia’s Okefenokee Swamp. 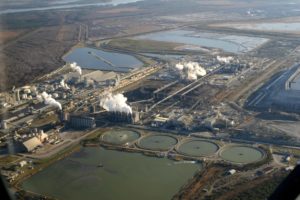 The phosphate mine and chemical plant, on the shore of the Pamlico River in North Carolina, has become the world’s largest facility of its type. Credit: Courtesy of Pamlico-Tar Riverkeeper

Environmentalists in Georgia recognize that the demonstration sand mine proposed by Twin Mines Minerals, on a site at the edge of the swamp, could become Georgia’s version of the phosphate mine in North Carolina – an extraction industry that arrived in a remote area, and remained.

“We believe [the proposed mine is] a camel that EPD should keep out of the Okefenokee’s tent,” Rena Ann Peck, executive director of the Georgia River Network, wrote in an email Monday, referring to the Georgia Environmental Protection Division.

The proposed sand mine borders a swamp that’s home to a “diversity of amphibians and reptiles, mammals, birds, fishes, and invertebrates and perhaps as many as 1,000 species of moths,” according to the United Nations Educational, Scientific and Cultural Organization. Comparable peat bogs exist but, unlike the Okefenokee, these bogs have been more impacted by human activity in Scotland, New Zealand and Indonesia. 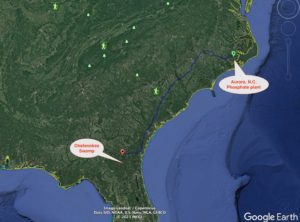 A proposed sand extraction mine near the Okefenokee Swamp is about 500 miles southwest of a phosphate plant in Aurora, N.C. Credit: GoogleEarth, David Pendered

The phosphate plant along the south shore of the Pamlico River is located in the sensitive Albemarle-Pamlico system. This system of wetlands, creeks and rivers is a part-time home for more than 70% of the fish species hunted for food or recreation along the entire Atlantic seaboard, according to a report by the U.S. Environmental Protection Agency.

This part of eastern North Carolina is rural country. Too inaccessible from the Outer Banks’ tourist retreats to be popular with crowds from Atlanta and Washington, D.C. Too sparsely developed to attract in-state vacationers. A difficult trip south from the waterfowl hunting destinations on the Albemarle–Pamlico Peninsula. Aurora is so remote the state runs a ferry to help workers commute to and from the sparsely populated north side of the Pamlico River.

The phosphate mine has expanded since the first phosphate was shipped in 1965. The mine is an engineering marvel described warmly by the Aurora Mineral Museum. In front of the museum is a mound of earth brought by the mining company for visitors to dig in search of fossils and bones – the source of the soil’s phosphate. The report notes: 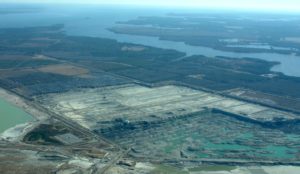 The phosphate mine covers much of the peninsula at the Pamlico River and South Creek. Credit: Courtesy of Pamlico-Tar Riverkeeper

Today, the operation has grown to the point that it imports from a facility in Augusta one of the raw materials used to process phosphate, according to a 2019 report from Nutrien Ltd.

Of particular note, the phosphate plant in 2000 attempted to begin a significant expansion program. This battle lasted about a decade, and was the most recent time the plant has attracted major attention from environmentalists, according to the Pamlico-Tar Riverkeeper. 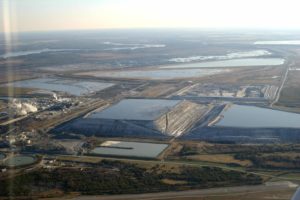 Stacks of gypsum waste from phosphate plants are an environmental concern. The EPA has banned the material from widespread use. Credit: Courtesy of Pamlico-Tar Riverkeeper

The proposed expansion was opposed by the U.S. Environmental Protection Agency, during the administration of President George W. Bush. The EPA sided with environmentalists in opposing the expansion. The EPA observed in a report: 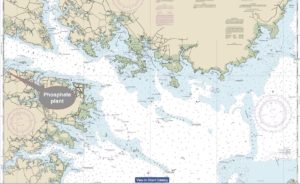 The environmental sensitivity of the region around the phosphate mine in Aurora, N.C. is evident in the nooks and cranies of the Pamlico River, which is part of the nation’s largest lagoonal estuary. Credit: NOAA, David Pendered 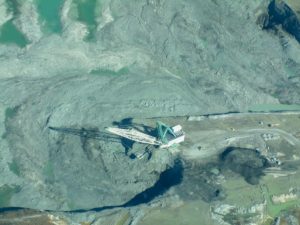 A dragline excavator removes overburden from the phosphate that’s to be extracted at the surface mine in Aurora, N.C. Credit: Courtesy of Pamlico-Tar Riverkeeper 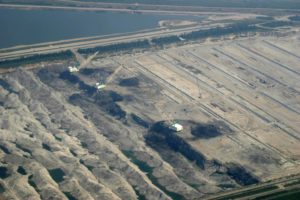 Excavators remove overburden in order to expose the phosphate deposits for extraction. The earliest explorer found the overburden measured from 70 feet to 150 feet above the valuable phosphate. Credit: Courtesy of Pamlico-Tar Riverkeeper 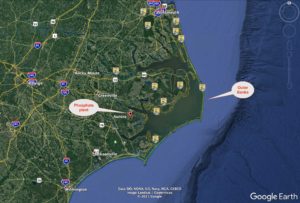