The City of Columbus’ water utility on Monday intends to ask the state to change statewide water quality rules in way that would delay, if not eliminate, a pending limit on the amount of sewage Columbus discharges into the Chattahoochee River. 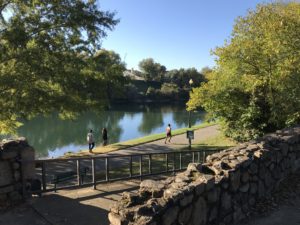 Columbus is resisting the state’s regulatory efforts to limit the amount of combined domestic sewage and stormwater runoff that’s discharged into the river from 11 outfall pipes. The city’s previous discharge permit expired in 2015 and has been administratively extended, records show.

On Monday, Columbus Water Works and its team of lawyers, from King & Spalding’s Atlanta office, are to present their new solution to resolve the dispute – at a meeting that has been specially called to handle this and another matter.

The Board of Natural Resources meeting is a virtual event, to start at 9 a.m. The meeting was not on the board’s annual calendar. It was specially called to authorize the sale of bonds approved in June by the state Legislature. The Columbus request was added to the  agenda.

Columbus’ proposal is for Georgia to create a new rule for setting the amount of pollution that is acceptable in a stretch of the Chattahoochee River near Columbus. Currently, the Total Daily Maximum Load is determined by the staff of the state Environmental Protection Division. EPD is part of the Georgia Department of Natural Resources, which is overseen by the Board of Natural Resources.

The Board of Natural Resources, not the staff, should have the final say in setting the total maximum daily load, according to the Columbus petition. 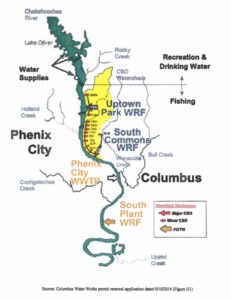 This shift would result in “better and fairer TMDLs,” according to the petition submitted on Columbus’ behalf by Lewis Jones and Patrick Runge, of King & Spalding:

The governor appoints board members to seven-year terms and the state Senate must confirm the appointments, according to a provision of state law.

The Chattahoochee Riverkeeper opposes Columbus’ request for a rewrite of the statewide law solely to accommodate the city’s pending discharge limit, though the organization is still researching details of the request, Kevin Jeselnik, the riverkeeper’s general counsel, wrote Aug. 7 in an email response to a request for comment: 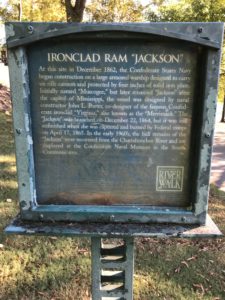 Historic signs along the Chattahoochee RiverWalk interpret past events, including nuggets about the Confederacy’s thwarted attempt to launch an armored warship from a shipyard in Columbus. Credit: David Pendered

This dispute isn’t about water quality, according to an April 21 letter from Columbus Water Works President Steve Davis to the state. The issue is about whether a limit on end-of-pipe discharges into the river is legal:

Jeselnik recognized in a 2018 letter that the Columbus facility did meet the standards of its day – 1992. Times have changed, Jeselnick wrote in the letter:

Previous Article
The court has spoken, now we need permanent protections for Georgia Dreamers
Next Article
Eleanor’s ‘Movies to Watch’ list – these from the early ‘80s