Terms of the deal for the Falcons stadium underscore the risks inherent in a delay in Atlanta’s sale of the bonds to fund the stadium, even as the Atlanta City Council appears to be in no rush to abandon land the state seeks for the stadium. 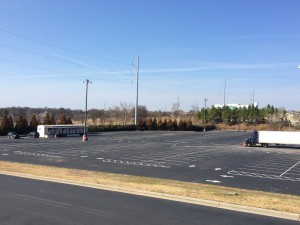 The former Herndon Homes housing community will become surface parking for the Falcons stadium, according to a signed deal. The marshaling yard is in the foreground and the vacant Herndon Homes property stretches to the north. Credit: David Pendered

The Falcons can terminate the deal if Atlanta hasn’t sold bonds and deposited into the appropriate account at least $200 million by Sept. 30. The Falcons can back out if the former Herndon Homes public housing site isn’t made available for surface parking. There seems to be no mention of what happens if Atlanta declines to abandon its property.

On Wednesday morning, the Atlanta City Council’s Utilities Committee is slated to convene a work session to discuss the proposed abandonments and the configuration of streets in the stadium area. However, the street configuration has already been determined – at least as far as the Falcons site is concerned, according to terms of the deal.

These details and a myriad of others are contained in the instruments signed Feb. 5 by Frank Poe, executive director of the GWCC Authority, and Rich McKay, president/CEO of Atlanta Falcons Stadium Co.

The Transaction Agreement contains a termination section that provides terms for each party to the deal to back out – Invest Atlanta, the city’s development arm; the GWCC Authority; and StadCo.:

Herndon Homes was built during World War II and named for Alonzo F. Herndon, founder of the Atlanta Life Insurance Co. The Atlanta Housing Authority demolished the community, of about 500 homes, in 2011 with plans to sell the property.

Since Poe and McKay signed the documents on Feb. 5, events seem to have turned against the stated plan to close the stadium deal by July 31. Here’s the timeline: 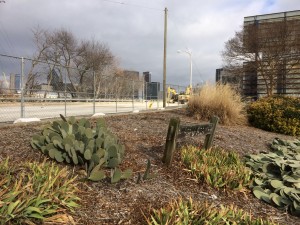 The Mitchell-Haynes Park, a sliver of greenspace, will be taken in by the new stadium project. Credit: David Pendered

Several major events could be impacted by road construction and church demolition planned near the Georgia Dome and GWCC, according to the projected timeline:

Temporary lane closures on portions of Northside Drive and Mitchell Street could affect events including: