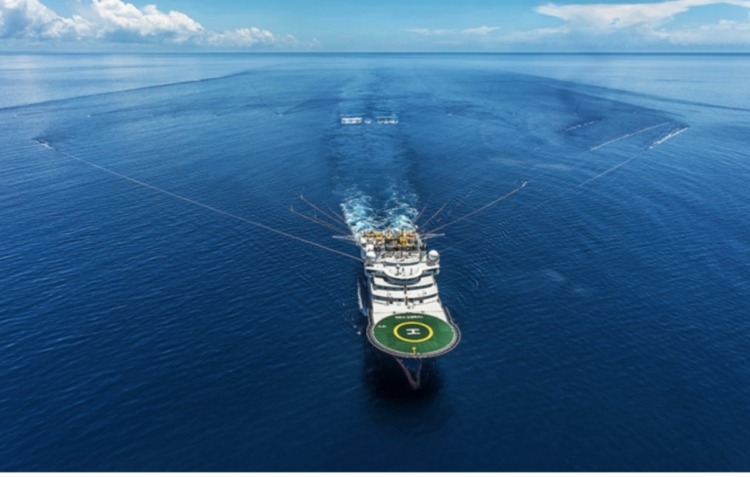 This seismic testing vessel is capable of pulling an array of 16 streamers that are almost 10 miles long and cover a survey area that's just over a mile wide. Credit: CGG Veritas via gcaptain.com

The federal government has authorized a company to harass animals in federal waters off Georgia’s coast in order to search for deposits of oil and gas. This testing is a first step to offshore drilling and the federal permit, plus four others, has been challenged in federal court by nine environmental groups. 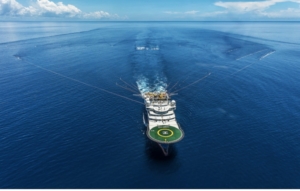 This seismic testing vessel is capable of pulling an array of 16 streamers that are almost 10 miles long and cover a survey area that’s just over a mile wide. Credit: CGG Veritas via gcaptain.com

The release of five permits to allow seismic testing in the Atlantic Ocean follows the Trump administration’s decision to open most of nation’s seabed to offshore drilling in leases to be signed starting in 2020. The decision removed restrictions imposed by the Obama administration.

The seismic testing approval came in the form of Incidental Harassment Authorizations that were issued by the National Marine Fisheries Service, which is part of the Department of Commerce.

IHAs were issued for federal waters stretching from Cape May, N.J. to Cape Canaveral, Fl. This area is twice the size of California, according to the lawsuit filed Dec. 11 in the U.S. District Court of South Carolina.

The one company authorized to work the waters off Georgia is CGG, a global company that used its Houston office to file an application in December 2015, according to the IHA and a notice in the Federal Registry. President Obama was in office and his administration evidently took no action on the requests filed by CGG and others.

The Trump administration approved CGG’s application on Nov. 30, according to the Incidental Harassment Authorization. The permit is good until Nov 30, 2021. 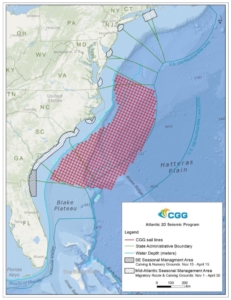 CGG is the one company the Trump administration authorized to conduct seismic tests for oil and gas deposits, and at depths greater than 13,000 feet. Credit: CGG’s IHA application

The technology for searching for undersea deposits of petroleum uses seismic waves emitted from a device towed behind a vessel that travels at least 4 mph, a speed that keeps the equipment from collapsing. The device sends a seismic wave to penetrate the ocean floor. The wave returns to the water surface, where it is recorded for later analysis by scientists looking for evidence of likely deposits of oil and gas. As the wave travels, it injures any living creature in its path, according to the lawsuit.

CGG is authorized to shoot seismic waves to the ocean floor at depths exceeding 13,000 feet and at distances from the coast ranging about 50 miles to about 402 miles off Georgia’s coast.

Environmentalists filed their federal lawsuit four days after the notice was published in the Federal Register.

“This action is unlawful and we’re going to stop it,” Diane Hoskins, campaign director at Oceana, a plaintiff, said in a statement. “The Trump administration’s rash decision to harm marine mammals hundreds of thousands of times in the hope of finding oil and gas is shortsighted and dangerous. Seismic airgun blasting can harm everything from tiny zooplankton and fish to dolphins and whales. More than 90 percent of the coastal municipalities in the blast zone have publicly opposed seismic airgun blasting off their coast. We won this fight before and we’ll win it again.”

The Southern Environmental Law Center is on the legal team, staffing the lawsuit from its office in Charleston.

“Ignoring the mounting opposition to offshore drilling, the decision to push forward with unnecessarily harmful seismic testing defies the law, let alone common sense,” said Catherine Wannamaker, a senior attorney for SELC, said in a statement. “An overwhelming number of communities, businesses, and elected officials have made it clear that seismic blasting – a precursor to drilling that no one wants – has no place off our coasts.”