North Atlantic right whales have gained protections and sea turtles are more imperiled under a new federal calendar for harbor dredging that came to light May 14 in a federal lawsuit that seeks to protect sea turtles. 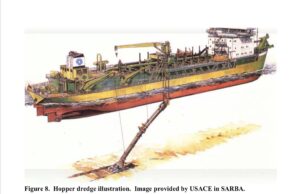 The entire calendar for dredging at some seaports along the East Coast has been modified in an effort to increase protections for North American right whales, according to a federal report with the new calendar. This species has been reduced to a population of some 360 animals.

The change allows harbors to be dredged in warmer months in North Carolina and continuing south through Georgia and Florida, to the islands of Puerto Rico and the U.S. Virgin Islands. Dredging is routine maintenance and typically involves vacuuming up debris that has filled a shipping channel and impedes ships as they use a port. The process has a history of harming certain sea life.

Whales will benefit from dredging in warmer months, because they’ll have departed for the cooler waters of New England and beyond. Sea turtles will be at greater risk, because in warmer months the females come ashore to lay eggs.

This shift in federal dredging policy was cited in a document referenced in the federal response filed last Friday to a lawsuit filed May 3 by the Southern Environmental Law Center on behalf of the coastal environmental group One Hundred Miles. 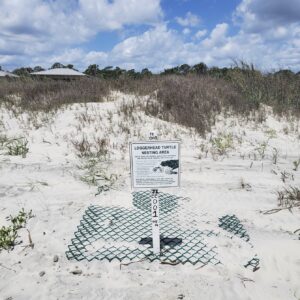 The first sea turtle nest of this season on Jekyll Island was found May 14 by the island’s Turtle Patrol. Credit: facebook.com/GeorgiaSeaTurtleCenter

OHM is trying to halt dredging at Brunswick that is to begin this month. This is the outset of sea turtle nesting season and OHM contends the dredging could disrupt the process and harm animals.

OHM’s lawsuit mentions the document that came to light in the federal response. But the lawsuit filed on behalf of OHM does not appear to mention the update that was completed July 30, 2020 and shifts the dredging calendar.

The update was cited in the federal response submitted May 14. It directs readers to page 645 of SARBO, for the South Atlantic Regional Biologic Opinion. The result published on the page was reached through negotiations involving senior leaders of the National Marine Fisheries Service, U.S. Army Corps of Engineers, and Bureau of Ocean Energy Management. The finding observes:

The section then addresses risks to sea turtles: 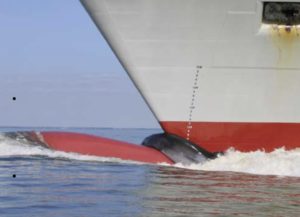 A whale is stuck on the bulbous bow of a vessel. Collisions with ships are a primary threat to right whales because their migration route crosses East Coast shipping lanes, and aerial surveys are to be increased during dredging operations to help monitor their location and advise captains. Credit: NOAA via FWS

Previous Article
In memoriam for North Atlantic right whales lost this season, but hope for recovery
Next Article
‘The Woman in the Window’ – talented Amy Adams unable to save movie