Federal authorities continue to list the status of an environmental review of the proposed spaceport on Georgia’s coast as “paused,” citing unspecified issues related to the project sponsor. That said, the sponsor has issued a statement saying it has moved the project forward by applying for a license to launch rockets. 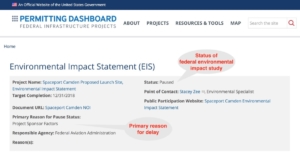 Federal officials have ‘paused’ the completion of the environmental impact statement for the planned spaceport in Camden County, citing factors related to the project sponsor, which is Camden County. Credit: permits.performance.gov, David Pendered

Meanwhile, a federal lawsuit regarding the environmental review languished in U.S. District Court in Atlanta during the federal government shutdown. On Jan. 28, a federal judge lifted a stay on the case that had been imposed Dec. 26, 2018.

The delay order was issued five days after a federal agency filed a response saying it still is looking for records related to an environmental review of the site. The Southern Environmental Law Center filed a lawsuit Oct. 15, 2018 under the federal Freedom of Information Act for information it first sought in March 2018. The SELC wants to see the results of the environmental review led by the Federal Aviation Administration.

The statement released Jan. 29 by Spaceport Camden related to the filing of request to launch rockets from the site of the planned spaceport.

The statement observed, “the successful submission of the [launch site operator license] marks more than three years of work to comply with the detailed regulatory requirements necessary to conduct orbital and suborbital launches from southeast Georgia.”

The statement included comments from two ranking members of Camden County’s board of commissioners, who were quoted along with Gov. Brian Kemp and several other former elected officials including longtime backer Newt Gingrich:

Camden County has applied for a federal license to launch rockets from a proposed spaceport, even while the FAA’s environmental review is on hold. File/Credit: faa.gov

A website that appears to oppose the proposed space launch site observes that the county’s application is meaningless. The site, spaceportfacts.org, states of the application:

Of note, Gov. Brian Kemp’s proposed budgets do not appear to contain any proposed funding for the spaceport or related projects in the proposed amendment to the budget that expires June 30, or the budget for Fiscal Year 2020, which begins July 1.

The federal website noted by spaceportfacts.org provides scant information as to the reason the spaceport review process is delayed.

The pause is related to the environmental impact statement the Federal Aviation Administration is leading. Participating agencies include NASA (National Aeronautics and Space Administration) and the National Parks Service, according to information on a permitting dashboard maintained by the federal Department of Transportation.

Another DOT site lists the project status as, “Paused.” Another line on the site observes: “Primary Reason for Pause Status: Project Sponsor Factors.”

Paused is defined as follows by the dashboard: