When “The Simpsons” was just beginning its march toward world domination, co-creator Matt Groenig recalled this hulking goon walking toward him, wearing a Simpsons T-shirt. Groenig realized at that moment how little control he had over his own creation. Basically, here was this guy whose social and political views, he was pretty sure, were so totally at odds with his own that, if the man had been so inclined, he would’ve beaten Groenig to a bloody pulp. 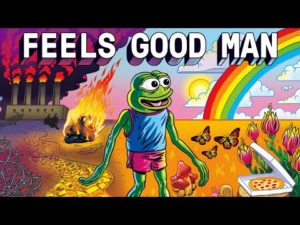 As chronicled in the documentary, “Feels Good Man,” something of the same thing happened to Matt Furie and his cartoon character, Pepe the Frog. Furie first drew Pepe back in 2005 as part of a comic called Boy’s Club. Pepe was intended as an amiable figure whose iconic “Feels Good Man” came about when another character asked why he dropped his pants all the way to the floor when he urinated.

Okay, it’s not Shakespeare. It’s not even Deputy Dawg.  But Pepe was an essentially well-intentioned figure, as was, for that matter, Furie himself. And Pepe caught on with the Internet. – and beyond. As we see in “Feels Good Man,” celebrities like Katy Perry and Nicki Minaj referenced him.

But with popularity came peril. Somehow, poor Pepe struck a chord with the fringe elements (read, nastier) of the alt-right. Before Furie knew what had happened, Pepe had been appropriated by 4chan and its ilk, i.e., a group of disaffected self-branded on-line losers whose passions include white supremacy, anti-Semitism and, by 2016, supporting Donald Trump.

Eventually, Pepe ends up on the Anti-Defamation League’s list of hate symbols, at which point Furie goes to battle (well, court) for his animated amphibian. 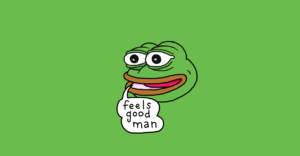 In some ways, “Feels Good Man” is much ado about not much.

To paraphrase “Casablanca,” somehow, in this transformed world of pandemic and social protest, the fate of one cartoon frog doesn’t amount to a hill of beans….

Still, the documentary contains an inarguably eye-opening element that introduces many of us to the extent and, sad to say, power of the Dark Web. These young men, most of them still living in their parents’ basements (Basement Boys I say in my notes), have a frightening reserve of anger that makes one glad they’re content to lurk on the fringes of the Internet instead of buying a gun and heading for the nearest school.

You crawl out of their underground lairs thinking: “This is not a nice place to visit, and I certainly don’t want to live there.”

Then again, it’s clear they don’t want me there, either.