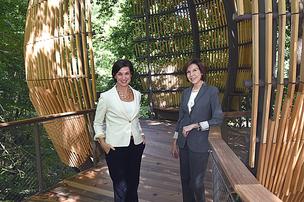 By Maria Saporta
As published in the Atlanta Business Chronicle on Sept. 23, 2016

The Fernbank Forest now will be the featured attraction of the Fernbank Museum of Natural History.

Starting Sept. 24, the expansion of the Fernbank Museum will be open to visitors – providing people of all ages and abilities to experience the largest old-growth Piedmont forest in the Southeast.

Susan Neugent, Fernbank’s president and CEO for 19 years, said she is more proud of this achievement than of any other in her tenure. That is significant because when Neugent joined the museum, it was on the brink of bankruptcy. It has since enjoyed 19 years of operating in the black.

Fernbank was able to open up its doors to the forest through a $20 million campaign, which actually ended up raising $21.7 million. That does not include another $5 million endowment to help take care of the forest. 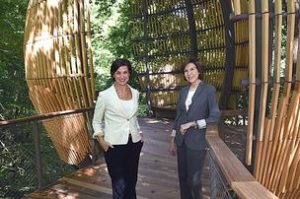 “We have come full circle – connecting with the original mission of Fernbank as a school in the woods and teaching about nature,” Neugent said. That was the original vision of Emily Harrison, who lived on the land and founded Fernbank Inc. in 1939 to preserve the forest.

The expansion in the forest includes 10 acres of woodland adventures that serve as a natural bridge to the 65 acres of urban Piedmont forest. The features include interactive exhibitions, elevated walkways, vistas overlooking the forest and the restored creek meadow as well as a trail system to Fernbank Forest.

Jennifer Grant Warner, who headed the project for Fernbank, pointed out how all the new features are connected to nature. There are two wooden pods for scenic viewing – one resembling the bloom of a tulip poplar and the other a fern. Natural motifs are found throughout the different features that include play areas for young children as well as the Isdell Wildlife Sanctuary, which overlooks the restored creek and the wetlands.

There also is the Kendeda Pavilion, an adventure outpost and field station where students will be able to have labs and learn about forest. Along the paths, there are multiple insect hotels where people can study their habitats.

A major part of the expansion involved restoring the woods by removing nearly 50 invasive species that covered the forest and damaged native plants and trees. Fernbank also has been replanting native species to reinforce the forest.

At one time, there were 21 species of ferns identified in the forest. Today, they have identified about a dozen, and the hope is that with the restoration of the forest, some of the other ferns will grow back. 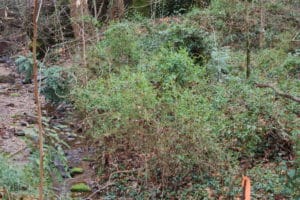 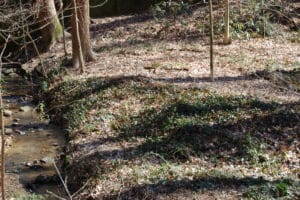 After the restoration of the forest (Fernbank Museum of Natural History

Another part of the expansion involved acquiring the homestead of the Cobb family, a family that had lived on the property for decades and had taken care of woods by the patriarch, who Neugent described as a naturalist. It was the acquisition of the property that enabled Fernbank to provide the natural bridge between the new Woodlands and the old-growth forest.

“A lot of people had a hand in strengthening this institution and making it a top-drawer science institution in Atlanta and the Southeast,” Neugent said. “The forest is a unique component. We are the only major museum of natural history connected to an old growth forest in a major metropolitan area.”

Because the fundraising campaign brought in an additional $1.7 million, Neugent said Fernbank will be able to make even more enhancements than originally planned.

“The additional dollars have allowed us to add more trails and more native plantings and more programming,” she said. “We are going to update the IMAX theater with all new laser and digital components.”

Fernbank also has been able to operate by generating 90 percent of its annual operating budget. It receives revenues from the gate, its store as well as special events. The rest of the money comes from the philanthropic sector.

The museum, which does provide educational programs for students around the state, receives virtually no public funds from either the local, state or national government.

“Philanthropy helps us advance the institution,” said Neugent, giving a special nod to the Robert W. Woodruff Foundation, which provided $5 million towards the campaign and the $5 million endowment to help maintain the forest. “Our mission is to help people understand their role in the natural world. We are a place where people can disconnect to reconnect.”