Let me guess. It’s barely two weeks into 2014 and you’re already wavering on your New Year’s resolutions. Maybe you’ve blown them altogether. Or if you’re like me, you haven’t even started them yet. What was supposed to be a fresh start is already a dead end.

Maybe we’ve got this all wrong.

That’s what my Decatur neighbor Susanne F. Fincher thinks. She’s a Jungian psychotherapist, a licensed counselor, registered art therapist and a leading international expert on mandalas—sacred circles found throughout centuries and cultures. At the core of her work is the study and understanding of cycles and patterns that are universal.

Despite our Western tradition of setting resolutions, Fincher, 71, says the dead of winter is precisely the wrong time to be setting out to change ourselves.

“I think that when we make and start working on resolutions at the beginning of the year, we are working against nature. I think that’s one of the things that defeats us,” Fincher told me the other day. “Mother Nature mandates that what we do at this time of year is hibernate, be quiet and not rush around and force ourselves to do things.”

“The time for setting goals and going after the things we want to do is really later, in the spring, when the flowers start to bloom and when the leaves start to show on the trees,” Fincher said. “That’s the time when to begin to think about stepping out.”

Fincher teaches that to know how to go forward, you must go inward as well. The mandala is a simple but powerful means of examining your thoughts, fears and desires. Like the meditation of walking the circular labyrinth, mandala drawing is filling in a circle with colors and symbols that can be random or intentional.

Fincher travels internationally to speak and lead workshops on mandalas. She teaches people how to draw them as a means of healing, of working out internal conflicts, expressing deep-seated spiritual longings and to spark growth and change.

We conceptualize the year as a circle and that is a mandala, Fincher said.

“It is thought that [mandalas] express worshipful awe of nature’s cycles and the mysteries of life and death,” according to Fincher’s website, creatingmandalas.com. “The alternation of day and night, the ever-changing moon, and the rhythms of the seasons are aptly expressed by circular designs.” 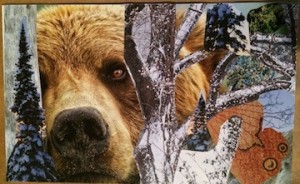 Collage representing the dormancy of the natural world in winter created by Susan Paul Johnson.

Fincher said the modern practice of making New Year’s resolutions is out of sync with the rhythms of the seasons and the traditions people once practiced during agrarian times.

“We’ve lost touch with the ancient tradition around the season. The 12 days of Christmas just ended last week,” said Fincher. “Back in the day, people took off much longer for the celebration of Christmas. The winter solstice, about the turning of the year, caused our forebears to come together as a community to be together to tell stories and stay close to the fire.”

“That’s really what we do best about this time of year,” said Fincher.

Winter is a good time to marinate possibilities, Fincher said. She uses mandalas to develop her own resolutions for the year, a process that germinates slowly during the cold weather months and isn’t finished until spring.

“One way I like to do it is let my goals for the year emerge from inner wisdom instead of trying to think what they are,” Fincher said. “What I do is collect images of things that interest me. I don’t know why they attract me. And I’ll arrange those in a circle in the mandala form.”

Fincher recalled a picture she was drawn to of an older woman and some children that she used in a mandala. It evolved into a resolution to spend more time with her grandchildren.

Fincher isn’t the only one who thinks New Year’s resolutions are ill-timed. 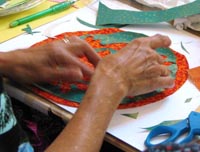 Working within a circle to create a mandala—through collage, drawing or other form of expression—can be a powerful spiritual exercise. (Credit creatingmandalas.com)

Ten days into 2014 and not having acted on any resolutions, I liked Fincher’s organic approach to steering life more gradually and authentically. It feels like I’d have a greater chance of success if I followed her advice. And if you’re going to make a resolution, you need all the help you can get. In a 2002 study that gets recycled in annual stories about New Year’s resolutions, the Journal of Clinical Psychology found that of those who make them, only 8 percent will actually achieve them by year’s end.

Other research pointed to an ancient example of Fincher’s perspective. According to History.com, “the practice of making resolutions for the new year is thought to have first caught on among the ancient Babylonians, who made promises in order to earn the favor of the gods and start the year off on the right foot. They would reportedly vow to pay off debts and return borrowed farm equipment.”

But their new year wasn’t Jan. 1. They set it on the first new moon following the vernal equinox—the day with an equal amount of sunlight and darkness. That turning point falls in late March, right around when the buds on our azaleas start to pop out.

Thanks to my neighbor, I now have plenty of time to get ready for my new start.