The annual story about sea turtles starting their nesting season along Georgia’s coast has been picked up fairly widely and presented as a “good news story” this year as the nation looks to nature for a sense of rhythm in arrhythmic times. 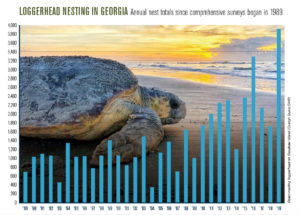 The number of loggerhead turtle nests counted on Georgia’s coast has been trending up, generally, for the past decade. Credit: Georgia DNR, photo by Caleigh Quick

The first turtle nest of 2020 was found April 27 on the beach of Cumberland Island, according to a report that day by the Georgia Department of Natural Resources. As of Friday, a total of seven nests have been discovered with an estimated 239 eggs, according to a report by the Sea Turtle Nest Monitoring Program. All are loggerhead turtles.

The Associated Press typically reports the news of the first nest along Georgia’s waterfront, and its report is carried in multiple news outlets across the country. This happened again this Spring, with the turtle nest story receiving more than a usual share of airtime on national networks.

CBS, for example, even before the first eggs were laid on Georgia’s coast, got off to an early start with a report April 18 that quoted scientists predicting a good season for nesting turtles. The reason was cited in the headline:

The CBS story observed the standard information that humans disrupt sea turtle nests by displaying lights on the beach, which disorient the animals. The report also noted the information that boaters can strike sea turtles, and that plastic materials that ends up in oceans and waterways cause them harm. 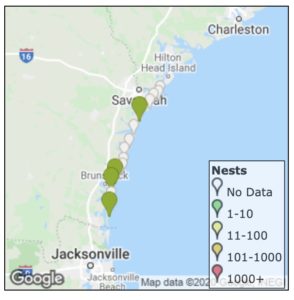 Sea turtle nests this year have been found along the state’s entire coastline. Credit: seaturtle.org

Michelle Pate was quoted far and wide for linking the COVID-19 pandemic to the annual rite of passage. Pate works as a sea turtle biologist along South Carolina’s coastline.

Pate’s quote appeared in multiple locations and wasn’t attributed, nor does it appear to have come from a statement on the website of Pate’s employer, South Carolina’s Department of Natural Resources. Here’s how Pate’s remarks appears on a Facebook on a post by an outdoor guide based in Myrtle Beach, Gator Bait Adventure Tours:

Georgia’s Cumberland Island leads the state in the number of nests recorded through Friday. Four nests have been spotted on Cumberland, followed by one nest each on Jekyll, Ossabaw and St. Simons, according to the Sea Turtle Nest Monitoring Program. The counts are estimates at this time.

This is the seven the consecutive year that the first sea turtle nest of the year was found on Cumberland Island. The record has something to do with the number of females that return every year to the island to nest, the number of good nesting areas and the diligence of a state wildlife biologist, Doug Hoffman, of the National Park Service. 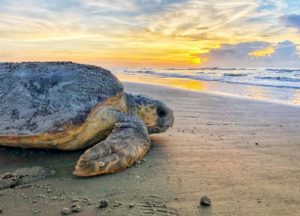