Every year, as part of the budget hearings at the beginning of the General Assembly’s regular session, the state’s chief economist provides lawmakers with a summary of the state’s fiscal condition. This year’s presentation by Dr. Jeffrey Dorfman was especially enlightening.

Given what we’ve been through in the pandemic, Georgia’s financial condition isn’t so bad. In fact, by some measures, we’re better off than we were.

In January of 2020, before the pandemic began, Americans were saving at a rate of 7-8 percent, Dorfman told the joint budget and appropriations committee. That zoomed as high as 33 percent as federal pandemic aid money was released, and has settled down to the previous level as these payments have ended. But during this period, Georgians socked away enough to have an accumulated savings of $75 billion.

Even though most of the federal aid has ended, personal incomes in Georgia are still about 8 percent above pre-pandemic levels. And the average Georgian’s credit score has gone up 8 points.

Not only will all that money in Georgian’s banking accounts support the state’s economy going forward, but according to Dorfman, it has a lot to do with why employers are having such a hard time hiring new employees. Nationally, having money in the bank is the biggest reason people cite for leaving their jobs, follwed closely by having a spouse who’s employed. A lot of families which had two people employed can now get by on one income plus the money they’ve saved.

These rankings are consistent with each other, although it may not seem that way. More Georgians are quitting their jobs in part because this is a good jobs market, and a lot of people are quitting in order to move on to better jobs. More are getting fired because with so many workers quitting, businesses are being forced to make questionable hires that don’t work out. All of which creates more openings, and ultimately more hiring.

“Unfortunately, that hire rate is exactly equal to the quit rate plus the separation rate, so we are hiring new employees at exactly the same rate that they are quitting or being fired,” Dorfman told the lawmakers. “So employers are working really hard just to tread water.”

In the last two years, American consumers only added $130 billion of debt a year, where normally the increase would be $350 billion a year. So even though Dorfman expects an economic slowdown over the coming year, he believes the ratio of savings to debt is strong enough to prevent a recession.

“This was the first time in American history we had a recession during which credit card debt went down and credit scores went up,” Dorfman said.

This has also been an unusual period because the recovery has been concentrated in the bottom rungs of the economic ladder. Upper-income Americans who didn’t receive pandemic aid checks still did well as stock values and salaries went up. But those in the bottom 20 percent doubled the amount of money they had in their checking and savings accounts.

All this puts the news about inflation, turbulence in the stock market and supply shortages in a somewhat different light. These are developments that could have a negative impact in an election year, and they are getting lots of play in the news. The dramatic improvement in the finances of those in the bottom fifth of the economy isn’t drawing nearly as much attention, but that doesn’t mean it won’t affect the way people vote this year.

At the national level, that’s a hopeful sign for Democrats. It’s not bad, either, for Gov. Brian Kemp, who has the revenues to finish his promised raise for teachers, plus a $5,000 raise for other state employees and significant boosts for health care and education programs. Not to mention sending a $250 check to every taxpayer in the state. 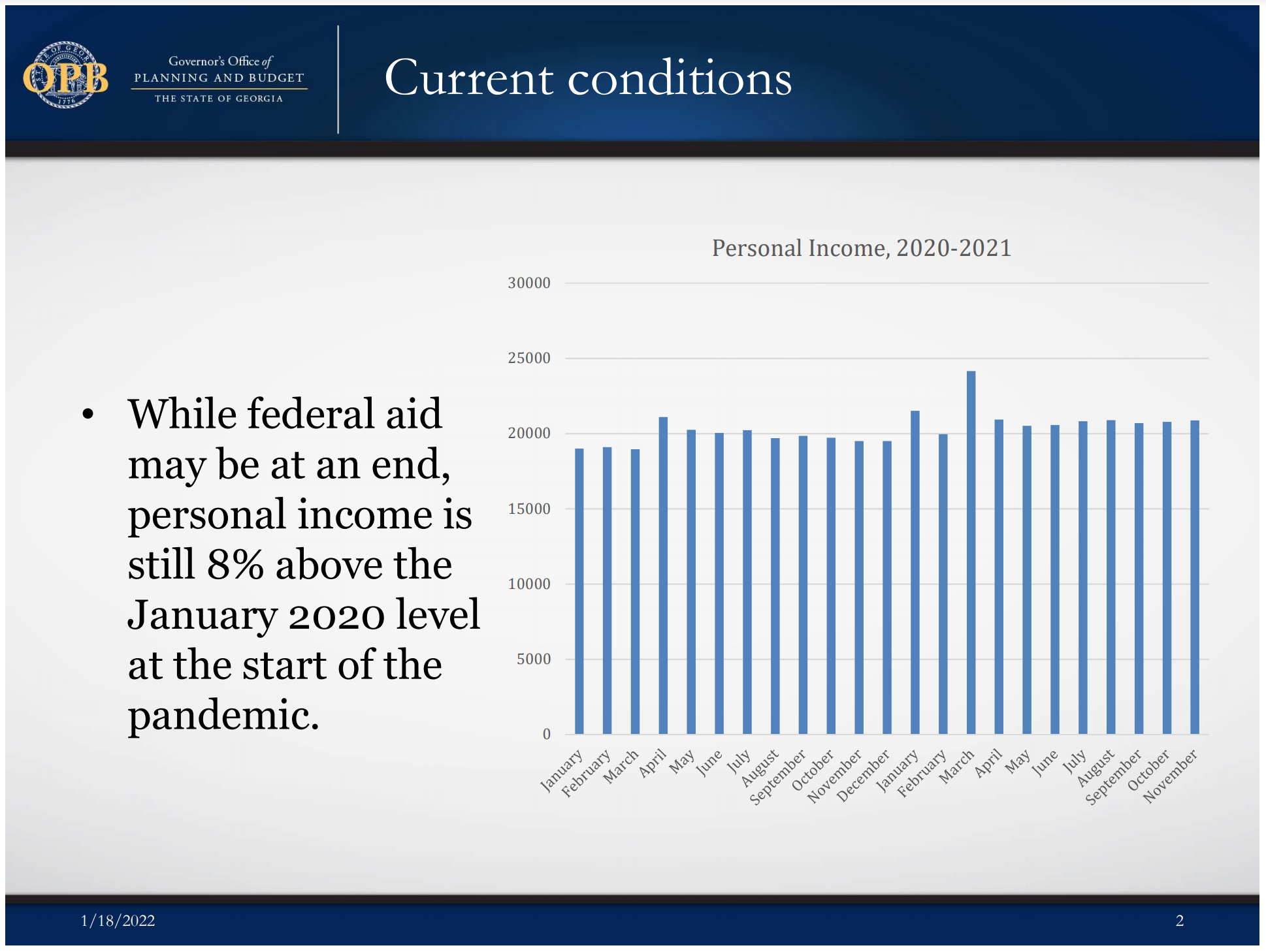 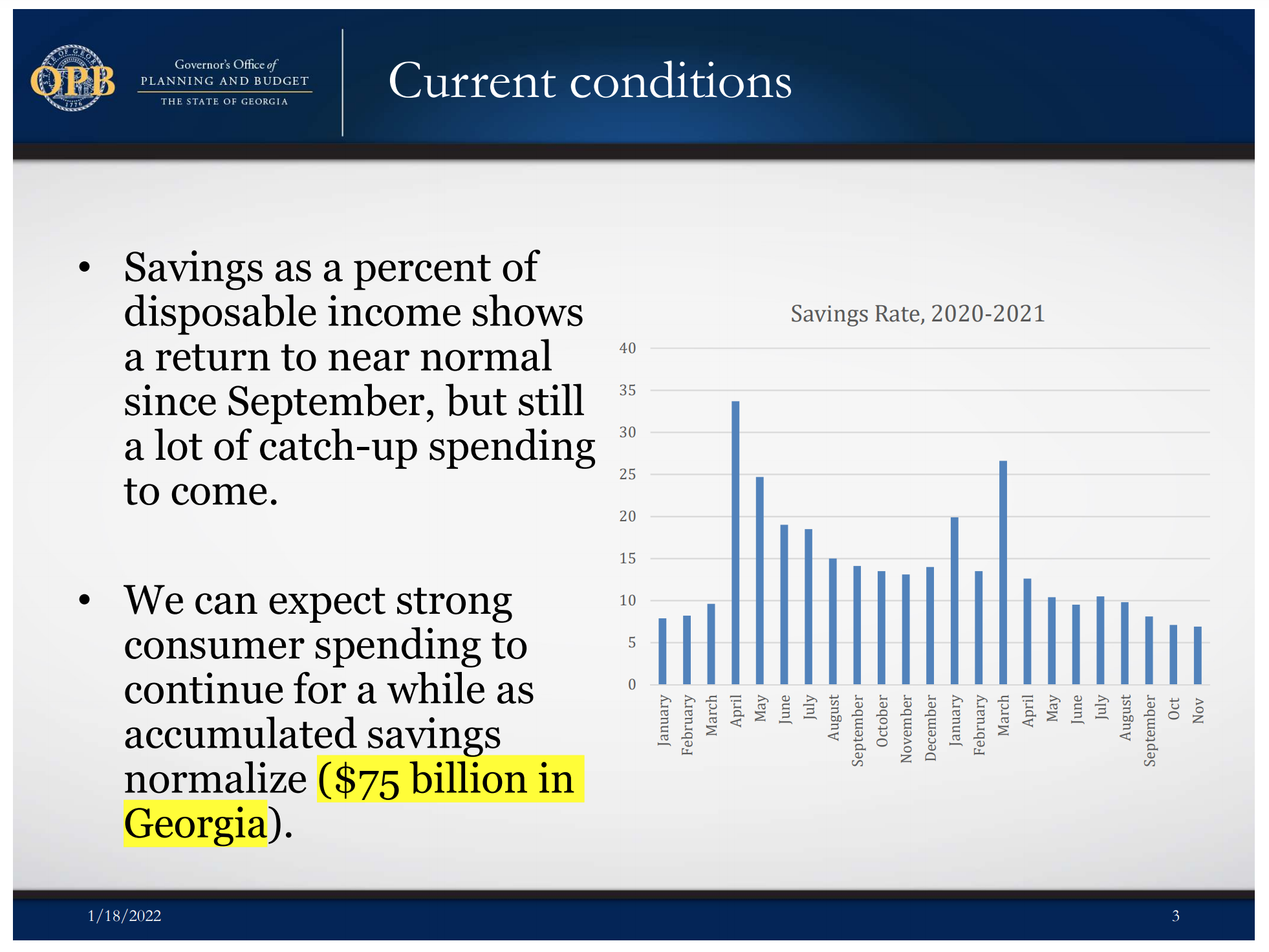 Like neighbors who’ve had a falling out, Kemp and Perdue chew over old grievances
Tom Baxter April 25, 2022 8:21 pm

Ominously, we may look back on this session with fondness
Tom Baxter April 4, 2022 7:03 pm

Like neighbors who’ve had a falling out, Kemp and Perdue chew over old grievances

Ominously, we may look back on this session with fondness

Georgia takes center stage: The Almanac of American Politics 2022 chapter on the state