An existing piece of Star Community Bar art is this classic sign from its early days hanging on an interior wall. Folk artist Panhandle Slim has proposed a mural on the exterior. (Photo by John Ruch.)

A well-known Savannah folk artist may paint a mural on Little Five Points’ Star Community Bar to honor its history as it faces possible demolition.

Panhandle Slim is known for meme-style paintings featuring a portrait of a person — from celebrities to regular folks — and one of their quotes. In recent years he’s become known for campaign advertising art for Georgia Democrats like gubernatorial candidate Stacey Abrams and U.S. Senators Jon Ossoff and Rev. Raphael Warnock. Former President Jimmy Carter owns a commissioned portrait of himself from the artist. 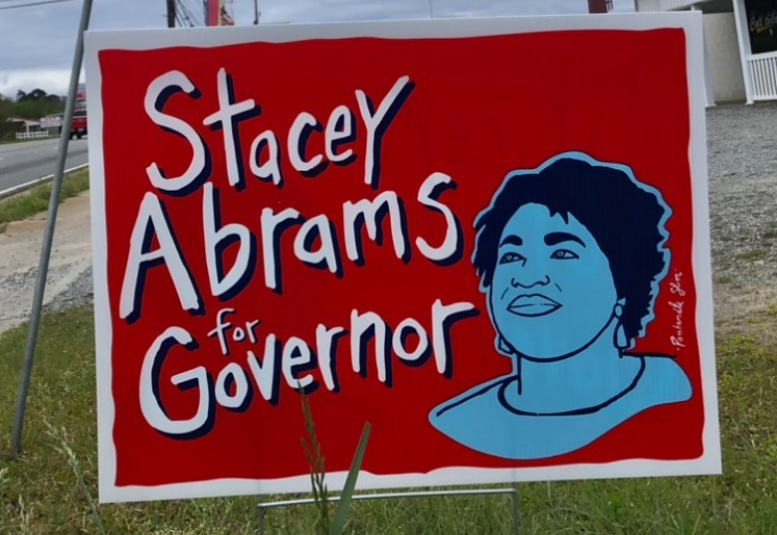 A Stacey Abrams campaign sign is among the recent work of Panhandle Slim, as seen on his Instagram page.

Now Panhandle Slim is stepping into the controversy and anxiety about the Star Bar’s possible demise in a plan that includes an offer to build it a new space.

“I offered to paint a mural on the wall to celebrate the culture and history of the Star Bar community,” he told SaportaReport. “…The Star Bar is important to me. My good friends from Atlanta played there often. So many good shows there.”

Born Scott Stanton, the Florida native previously was a professional skateboarder and in the 1990s fronted the cult punk rock band The Causey Way, which had an album on the legendary San Francisco label Alternative Tentacles. Slim said his band never got to play the bar, but he did sit in on a concert there with his friend’s band, the ’90s hit Atlanta act Babyfat (later known as Ultrababyfat).

Former Star Bar co-owner Jim Stacy — also known for his history in punk bands, restaurants and TV food shows — said at a Sept. 18 community meeting that he is in discussion with the landlord for permission to paint the mural.