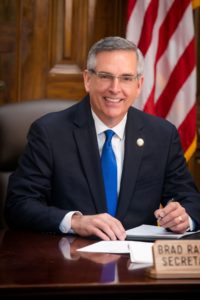 After the early-evening notice that Donald Trump had dramatically improved his margin in Miami-Dade, Florida was Dullsville, a slam dunk for the incumbent president. This year, the drama shifted northward.

Georgia wasn’t as crucial to this presidential election as Florida was in the contested 2000 election, but it was important, especially with our two U.S. Senate races.

Twenty years ago it was “hanging chads.” This year it was an “adjudication module,” which caused problems with the machines reading absentee ballots in Gwinnett County and caused the counting of some 60,000 ballots to be delayed into Wednesday afternoon.

When a water pipe burst at State Farm Arena and the count was delayed in Fulton County, it only seemed like another Fulton County election. But the glitch in Gwinnett raised eyebrows. And while the bulk of uncounted votes was in the Atlanta metro area, there were significant pockets in counties around the state.

At a late-morning press conference Wednesday, Georgia Secretary of State Brad Raffensperger expressed confidence that this and other problem would be resolved within hours.

“We’ll be off everyone’s radar and we’ll be worried about the states up north,” Raffensperger said.

Joe Biden would need to win a huge chunk of those votes to overcome Donald Trump’s statewide lead of a little more than 100,000 votes. But these votes are also important in determining whether Sen. David Perdue has escaped a runoff with Jon Ossoff, and whether Carolyn Bourdeaux has defeated Rich McCormick in the 7th District congressional race.

So as of Wednesday morning, Georgia was still on everybody’s radar.