The Freedom Park Conservancy wants Atlanta’s opinion on the first major update of the park’s master in about a generation.

The first phase of the park opened some 26 years ago as a trail alongside the then-new Freedom Parkway.

But given the passage of time, the changes in the neighborhood and even COVID-19, park leaders say it’s time to re-assess how the park might could serve folks better.

Even they who love it the most admit Freedom Park has its design challenges: its odd X-shape, the roads cutting through it, compacted ground and the lack of a marquee entrance.

SaportaReport spoke to three folks about why Freedom Park’s upcoming master planning is important and what kind of public involvement to expect. Hint: they’re going to want to hear from y’all. The SWA Group of Houston will oversee the process.

To keep in touch with the Freedom Park Conservancy, the nonprofit that raises money to promote the improvement and preservation of the park, check Freedompark.org, where you’ll also find links to social media.

This interview has been edited and condensed. The full version is here.

SaportaReport: Y’all are going to get a master plan done. Why do you need that? What what kind of questions are you trying to answer?

Stephanie Wolfgang, FPC master plan chair: The original plan for the park was done kind of at the height of the Olympics planning for Atlanta. It wasn’t implemented in some ways completely and since then there’s been very little change in the park and little additional thought and planning put into it aside from some art pieces.

And so the idea is to think about: ‘How has the park changed since that original plan was put forth, and in what ways can the park better serve the communities now?’

The communities around the park are much different than they were even then. So it’s really about getting the opinions of all of our neighbors and the city at large, to see what do they want this park to be. And then we’ll use that master plan to implement that moving forward for maybe the next 25 years. 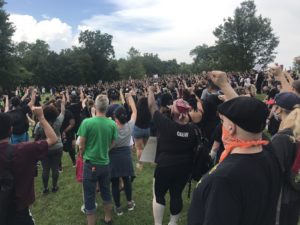 BLM protesters gathered on June 5 in Freedom Park. Park leaders want the park to tell an area civil rights story too — the King Center is on one side of it. Credit: Kelly Jordan.

SaportaReport: Why is now the time to do it? Does it have anything to do with COVID-19 or just being a long time after the Olympics? Is there anything sort of pressing at the moment?

David Hamilton FPC master plan coordinator: … Some of it, honestly, it is because we have been thinking about this for a number of years, and we finally raised the funds to do it.

But I think actually more importantly, and maybe somewhat by a coincidence, I think now is a really good time to reevaluate the worth, and the place of public space and parks. Because of COVID, because of where we are as a city, those things are becoming increasingly important. Pedestrianism is becoming more important, having green space is becoming more important. And certainly we think about it differently now that we’ve gone through, and after the COVID-19 crisis. … People that were stuck inside of their houses for months are using the parks in a different kind of way.

Stephanie Wolfgang: We actually finalized our RFP that went out to design consultants last year, so it was going to happen this year regardless. But … the major park systems that we know of now, like Central Park in New York, actually came in response to pandemics…

Stephanie Wolfgang: There will be some very concrete outcomes. There will be a new plan, kind of like what you’re referencing: a map, a physical plan, an aerial view showing some proposed improvements and future projects. We’ll also see some kind of renderings, prospective 3D views, giving the idea, a feeling of some of those future spaces.

And then there’s sort of a category that that we’re not sure yet, that will probably evolve as the master -plan process evolves. It might take the direction of some type of art curatorial plan. But it also may not. It depends on what stakeholders find the most important.

And the most important thing for the Conservancy is that it frames up the series of projects that then we can fundraise towards and act on in the future. So it will include cost estimates, so that we can really roll that into planning with the Conservancy itself but also the [city] parks and rec department.

You want the public to be involved in this — How can the public get involved? What should people be looking for in terms of engagement?

Harriett Lane, FPC Board chair: The Freedom Park Conservancy’s core identity is rooted in civic activism, so we place a high value on community engagement and honoring the historical, natural and cultural assets of the park. We think it’s really important for public participation. We have a whole line of tools, the design firm has a whole line of tools, that we can choose from. So it’s our decision, stakeholders’ decision, on how we do that and present that to the public, but it will be for all the public, along with different stakeholders too.

…These relatively new virtual tools allow us to do that and I think they’re actually going to allow us to get a much wider perspective from the public at large. You won’t have to go to a meeting, you can do it from the comfort of your home, you can do it at any time, you can comment. You don’t have to be the kind of person that likes to stand up in front of crowds like you would in a normal kind of charrette meeting … You can you can be a shy person with good ideas versus the neighborhood gadfly that likes to talk.

ELDER is a site-specific public art project that captures the legacy of nature, history, and citizen-led advocacy associated with Freedom Park.

SaportaReport: What else would y’all tell people, what else do people need to know about Freedom Park, planning, the next couple of years?

Stephanie Wolfgang: I think what we want people to be thinking about is a couple things. One: Do they even know where freedom Park is? That’s a challenge that we’ve seen.

David’s seen it for a very long time on the board, is that people still aren’t really aware of where it is. And so I think that’s kind of the first hurdle. And that’s something that we’re really hoping the master plan will help to address: boundaries, thresholds, that kind of thing, so people actually know where it is.

And then we want people to think about programming: What would they like to be doing in the park? And how can the spaces for that activity be improved, whether that’s just more trails because they want to bike more, or is it all about picnic space, is it about more performance space? So that’s the kind of thing we want people to be bringing ideas about to our public input meetings, especially.

… As a board, we’re very interested in storytelling. So there are a lot of stories of strength, and of course there are stories of loss here because there were houses, homes, neighborhoods razed for the construction of this park.

And that’s work that several of our board members have done in the past couple years, working towards exhibits like Dwelling that showcase those stories of the past.

That kind of storytelling and narrative is something we also want people to bring to the table and we want to see how we can celebrate that in the actual physicality of the park, as well.