Riding an all-electric bus, MARTA leaders on Tuesday celebrated receiving a recent grant of $19.3 million from the Federal Transit Administration to purchase a total of 25 electric buses and install the charging infrastructure.

Nuria Fernandez, the Federal Transit Administration (FTA) administrator, was on hand to formally announce the grant when the bus stopped at the Edgewood-Candler Park MARTA station.

“We typically have these announcements in Washington, D.C.,” Fernandez said during a brief interview on the bus when she talked about how the $19.3 million grant would help with transit-oriented development and help with housing and transportation. “It’s great to announce that here. MARTA has been at the forefront.” 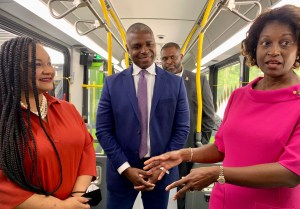 Fernandez said the grant will allow MARTA to “start transitioning from fossil-fuel dependency” to electric transportation.

“Our goal is to reduce greenhouse gases by 50 percent by 2030 and to reach zero emissions by 2050,” she said. “It’s an investment that’s going to bring a sea change.”

Collie Greenwood, MARTA’s interim general manager, said he was excited to be able to have the announcement with the FTA administrator.

“We are grateful to the FTA for its continued support of our sustainability efforts,” Greenwood said, “Our goal is to continue adding electric buses to the fleet to help combat climate change and reduce the public health impacts from air pollution, especially in our most vulnerable populations.”

Rep. Nikema Williams (D-Atlanta), who serves on the transportation committee, boarded the bus to thank Fernandez for her support of MARTA, highlighting the electric buses as well as last week’s announcement of the investment to redo the MARTA Five Points Station.

“I know there will be more to come,” she said.

MARTA board Chair Rita Scott also was part of the bus tour with Fernandez.

“I’m so excited about the electric buses and the innovations we are bringing to MARTA,” she said. “I can’t tell you how this is going to help emissions and the community.”

Fernandez spoke of it being a new day for transit in the United States, largely because of President Joe Biden’s appreciation for mass transit. Biden was a regular AMTRAK rider when he served in the U.S. Senate, and he has pledged unprecedented support for transit.

“I couldn’t be here at a better time,” Fernandez said. “I was in this same job during the Clinton administration, and we were always begging for funds.” 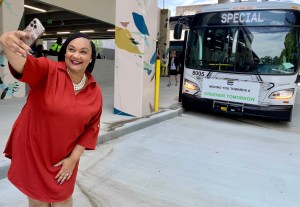 U.S. Rep. Nikema Williams takes a selfie in front of one of MARTA’s electric buses. (Photo by Kelly Jordan.)

Fernandez went on to describe the Biden-Harris administration’s focus to close gaps and ensure that funding for transit is available after years of disinvestment. She said the FTA’s portfolio is multimodal — “buses, trains, ferries and trolleys.”

Given the fact that MARTA and the City of Atlanta are during a pivotal moment trying to decide which modes of transit (buses or rail) should go on different corridors, Fernandez was asked whether the federal government has a preference.

“When it comes to public transportation, we believe communities must select the modes that best serve them,” Fernandez said. “This is an opportunity for MARTA, ARC, the ATL — to decide how they can transform communities. They can take the full amount of funds to make a decision that best suits the communities they represent.”

MARTA Chair Scott then chimed in to say that she and her fellow board members are taking input from the different constituencies.

“We are listening to our jurisdictional partners,” Scott said. “We are here to serve. We listen to the people we represent, and we are making sure we represent them.”

The 25 new electric buses will be housed at MARTA’s Perry Bus Garage, and they will operate along several bus routes in west Atlanta in many disadvantaged communities, and they will connect to rail stations on both East-West lines and the North-South lines.

“The transition to electric presents an opportunity for us to attract the next generation of transit professionals while building on current employees from apprenticeship to journeyman and from student to professional operator,” said Britt Dunams, president of the Amalgamated Transit Union Local 732. “As the transportation industry moves away from diesel and natural gas, workers who know how to operate and service electric vehicles are well-positioned to advance their careers.” 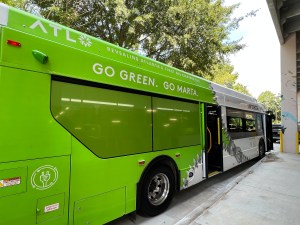 MARTA’s remaining bus fleet is made up mostly of compressed natural gas buses that contribute to the Authority’s shrinking carbon footprint, reducing emissions the equivalent of keeping over 370,000 cars off the road or powering almost 300,000 homes for one year.

Last year, MARTA was awarded the American Public Transportation Association Gold Level for its Sustainability Commitment Program, recognizing the agency’s ongoing commitment to sustainability initiatives that have a positive impact on the environment and the communities it serves.

MARTA’s sustainability efforts are in four categories — buildings, environment, community and climate. Over a seven-year period, MARTA has reduced its water use by 40 percent, greenhouse gas emissions by 27 percent, energy use by 14 percent and waste by 13 percent.