A would-be developer of a Midtown medical tower and Lidl site revealed details of his plan to a Fulton board Tuesday, while asking for a tax break worth $1.8 million over 10 years.

The company’s plan is for a 7-story medical office building atop a Lidl grocery store on Ponce on the block across from Krispy Kreme, according to Aaron Fortner of Capital City Real Estate, speaking to the board of the Development Authority of Fulton County.

Right now, the Ponce side of the block between Penn and Argonne avenues is heavy on surface parking and comparatively light on businesses.

Capital City proposes a 115,000 square-foot medical office and the Lidl, all atop buried parking on about 1.2 acres of land at Ponce and Penn.

“We do need the tax abatement to make this work for them and they will not come into the deal without it,” Fortner told the board.

He said that it’s costly to build buried parking on that site, but yet the building won’t be able to attract medical rents as high as the highest-rent buildings on Peachtree do.

His pitch divided the board.

Board member Steve Broadbent asked about supply and demand for medical office space, and the developer’s argument that there’s high demand for such space in Midtown, but yet the idea that the building can’t fetch the highest rents in the neighborhood.

“If there’s an unmet need for medical office space, it seems like it would get taken up very quickly,” Broadbent said, before his “no” vote.

Board chair Michel Turpeau said the grocery affordability component is what got his attention — the prospect of folks buying food for less than they might pay at, say, Trader Joe’s. Turpeau voted “yes.”

Overall, the abatement got preliminary approval by a 5-3 vote with one abstention. The developer would need to request a second vote to finalize the tax break.

Capital City’s development would also include 59 residential units, but that’s not part of the property that would get a property tax abatement if the deal is finalized with a second Fulton board vote.

Capital City has been working on the plan for more than a year and it’s gone through revisions. One earlier version would have been much more residential. There was some neighborhood chatter about an earlier version perhaps being too tall or creating too much traffic for some neighbors’ liking.

The site is on Midtown Neighbors’ Association’s radar.

“The Midtown Neighborhood has a strong interest in the evolution of the Ponce corridor from Spring Street to the BeltLine,” said MNA via email Tuesday.  “Every available site is an opportunity to embrace innovative design and thoughtful community engagement. Those opportunities should not be wasted.  We appreciate developers that strive to make the best use of a site and take seriously the impact of their building on the community for decades to come.  Despite the current absence of any variance or rezoning need, MNA Land Use has a commitment from the Capital City development team to meet with our organization to review their concept in January.  We are looking forward to it. “

The board of Fulton’s development authority also granted final approval for other property tax breaks in the city of Atlanta.
It unanimously granted a property tax break worth $2.5 million over 10 years to the developer of new housing sketched out for the old Exide battery site in Capitol View. The first-round approval was granted to developer RangeWater, though the development is now being built under the name 11246 Allene Owner LP.
The Interlock II, a mixed-use development across Northside from Georgia Tech was granted a property tax break worth $5.5 million over 10 years.  That deal was controversial when master site developer S.J. Collins Enterprises first approached the board in January with the idea of mixed use including a grocery store. The dispute is over whether that spot is or isn’t a food desert. It’s within a mile and a half of the Atlantic Station Publix plus two grocery stores at Howell Mill. But in the south and south east directions, toward English Avenue and Vine City, the pickings are much slimmer. The board approved the abatement for Interlock II Tuesday with one vote against. 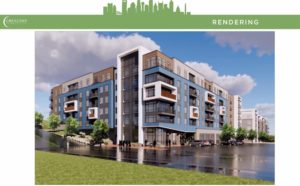 It was the same approval for a tax break worth $3.4 million to Crescent Communities’ planned residential development at 1330 Fairmont Avenue in Blandtown. The board gave that one preliminary approval in September, a day after Atlanta City Council asked them not to.

Atlanta City Council argues that Fulton is quick to give tax breaks in hot neighborhoods like Midtown and around the BeltLine, where they suspect developers are going to build anyway.
But Fulton’s criteria is that developments simply need to increase the parcel’s value by at least five times — thus raising more money for the city, the county, the schools or the BeltLine once the owner starts paying a full property tax bill.  The Fulton Development Authority doesn’t have any formal requirement that a developer prove that a tax abatement is necessary for a development to work.

Since January, 2019, Atlanta’s and Fulton’s development authorities have given first or final approval to property tax breaks on 44 properties in the city of Atlanta, mainly in Midtown and on the east side. If all 44 properties get built, those are tax breaks worth a total $240 million over 10 years.

Technically, these abatements are granted through “lease-purchase bonds,” which give a tax-exempt public agency part ownership of a parcel on paper. The beneficial owner of the property benefits by simply owning a smaller share of the parcel and so getting a property tax break.

This story has been updated to give the correct vote tally for the Ponce building tax abatement. It was 8-3, not 7-3.