Halley Matula and Bambi wait outside Fulton County's animal shelter for the arrival of a dog who could be a perfect match for Bambi, and might be the third dog adopted in their home. Credit: David Pendered
Share
Tweet
Share
Pin
Pocket
WhatsApp
Buffer5
Email
Reddit
5 Shares

As Halle Matula watched little Bambi run around the play area outside Fulton County’s animal shelter late Tuesday afternoon, Matula said she hopes county commissioners on Wednesday will approve the proposal to replace a crowded animal shelter that opened in 1978. 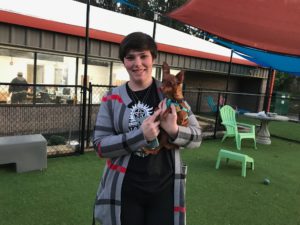 Halle Matula and Bambi wait outside Fulton County’s animal shelter for her boyfriend to arrive with a shelter dog to visit with Bambi. They seek to adopt their third dog from the shelter. Credit: David Pendered

Matula didn’t hesitate to support the proposed facility. She’s a fan of the current shelter and staff. But she’s seen the cramped conditions. Bambi was adopted from the shelter last year, along with another pup. Matula said she and her boyfriend have returned in search of a third dog and brought Bambi for a meet-and-greet.

“This place is really great,” Matula said. “They take really good care of the animals. They care about all the animals that are here, the cats and the dogs, and they really do everything they can to help them get a new home.”

Matula knew about the proposed new shelter and gives it a thumbs up.

“It would be great if they could get support and extra funds for a new, bigger facility so they can help more animals,” Matula said. “That would be great.”

And with that, a shelter dog appeared. Bambi and the shelter dog greeted each other, and so commenced the early stages of another possible adoption. The situation represented the criteria Fulton’s shelter seeks to fulfill – provide a pleasant place for animals and humans to interact; provide animals with adequate space so their behavior is adoption-friendly; and create a healthy environment.

Fulton County’s Board of Commissioners is slated on Wednesday to consider a proposal for a new, free-standing animal shelter. The commission is to discuss a feasibility study that was completed at the behest of the commission in March: 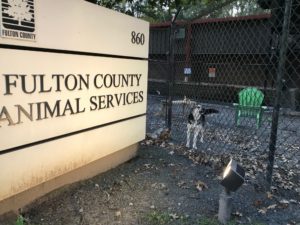 Kizzy may look like a shepherd mix, but has been identified as a Finnish Spitz who’s estimated to be 7 months old. Credit: David Pendered

Fulton should not repeat the mistakes made by DeKalb County when it built a shelter, states a feasibility study the commission is to discuss Wednesday. DeKalb built a shelter that’s a third smaller than planned, which was crowded the day it opened; the $15 million in construction costs savings are creating problems with operating and maintaining the facility, according to the feasibility study.

Dogs outnumber cats at the shelter and they are crowded into kennels at levels six times higher than the recommendation from the Association of Shelter Veterinarians. Other signs the facility is overburdened and not up to current standards by two groups: the shelter vets and American Animal Hospital Assoc.

Points raised in a feasibility study the commissioners are to discussed Wednesday include:

Fulton’s population has nearly doubled since the animal shelter opened – from 589,904 in 1980 to nearly 1.1 million in 2018, according to Census reports. Presumably, the number of untended animals has risen, as well. 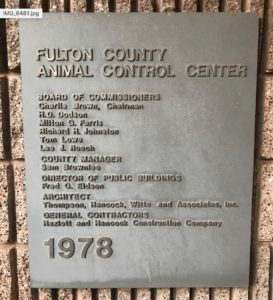