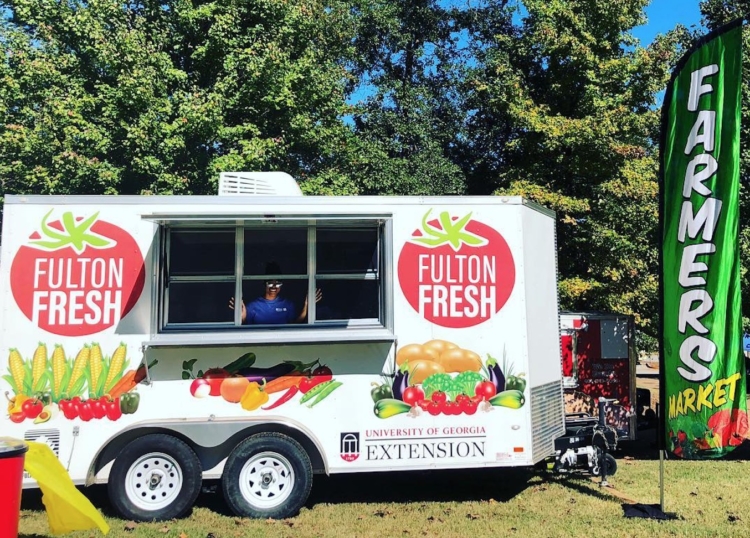 The Fulton Fresh Mobile Market begins delivering produce the Tuesday after Memorial Day, and its route reminds that food deserts existing in communities generally thought of as well served with neighborhood amenities – including neighborhoods in or near Alpharetta and Chattahoochee Hills. 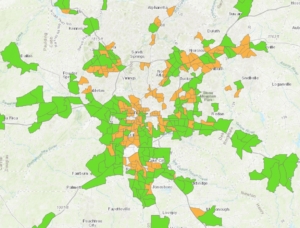 The areas in bright colors meet the federal definition of food deserts. The green areas denote places where a significant number of residents are more than a mile from a supermarket; the orange areas are greater than a half-mile from a supermarket, as of 2015 Census date. Credit: ers.usda.gov

Food deserts are tracked by Census data and the information is processed by the U.S. Department of Agriculture. According to the USDA’s Food Access Research Atlas:

Fulton’s mobile produce market delivers more than fruits and vegetables to neighborhoods where fresh produce can be a challenge to obtain.

The markets begin with a cooking demonstration that shows a method to prepare produce that results in a dish that promotes a healthy diet, according to Kristen Sumpter, an agent with the University of Georgia’s College of Family and Consumer Sciences based in East Point. The fresh produce program is sponsored by a collaboration of Fulton County and UGA.

“We start with a 30-minute nutrition class, with programs related to lowering blood pressure to the importance of eating colorful fruit and vegetables,” Sumpter said. “Then we have a food demonstration to show what to do through food preparation to lower blood pressure, such as a no salt dish.”

Once the cooking demonstration is complete, bags of produce are to be distributed to participants who arrived at least 10 minutes before the class starts. 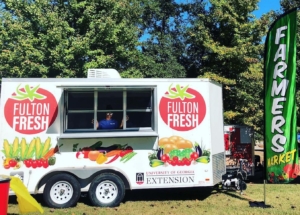 Bags are to weigh from 10 to 15 pounds, Sumpter said. They’re to be filled with an array of fruits and vegetables grown by farmers in Georgia.

“We try to have 90 percent of it local within Georgia,” Sumpter said. “We’ll have a featured farmer every week, in one of the five metro counties. Maybe yardlong beans or large leaf basil – something really cool and unique. And we highlight that farmer.”

Sumpter didn’t provide a specific recipe that will be demonstrated to show healthy alternatives to traditional preparations. But a dish of green beans could be one example.

Green beans don’t have to be prepared in ways that have been lovingly described as Southern staples – sautéed in bacon, or simmered in water that’s been flavored with salt and salt-infused chicken broth.

Green beans can be steamed, to bring out crispness and natural flavor. Green beans can prepared in a cassarole with a homemade white sauce that a recipe by the Mayo Clinic assures is as tasty as the salt-laden version that shows up on many a holiday table.

The fresh produce program is sponsored through a collaboration of Fulton County and the University of Georgia’s Extension Office. It’s part of a comprehensive effort to increase the awareness and consumption of in-season, local produce, with an eye toward improve health outcomes for young and old alike.

As an overview of the program describes:

Note to readers: Visit the Fulton Fresh Mobile Market’s website to see the dates and locations it will serve during a 10-week period this summer.