Fulton County and its cities and schools are missing lots of money due to undervaluation of big commercial properties, according to audits.

So Fulton leaders are proposing that when commercial property owners come to appeal their tax valuations, they also bring any independent appraisals of their property and possibly other documents. 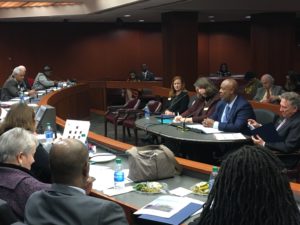 “The person who is getting $40 a square foot for rent when the average is $25 or $28, that person will never come forward,” said Fulton County Chief Appraiser Dwight Robinson, speaking at the state Capitol Friday to the county’s group of state legislators.

“We need that information if we are to optimize commercial valuations,” Robinson said.

That real information would replace industry averages from specialist publications that Georgia assessors now use to value commercial property.

A bill coming to the state Capitol in early February would change state law so that Robinson and all county tax assessors could get that information during the appeal process.

It’s a dry topic, said state Rep. David Dreyer, D-Atlanta, who’s in the final stages of drafting the bill. But it’s something that unites a lot of folks too, he said.

The bill will target larger commercial properties in some way; a draft suggests applying it to property worth more than $5 million, excluding small multifamily apartment buildings, agricultural or vacant land.

It’s not clear how much value may be missing from the tax base that supports Fulton, its cities and schools.

That’s because auditors and researchers who have found undervaluations have depended on samples of buildings mainly in Downtown Atlanta, and haven’t done a countywide analysis.

That audit suggested that a good bit of the undervaluation could be attributed to deep-pocketed commercial property owners and hired experts overcoming the laypeople on the county Board of Equalization.