Fulton County can expect about twice as many people to need critical COVID-19 hospital care in October as need it now, if Georgia and Georgians don’t change their ways.

That’s according to a projection presented Wednesday as part of a regularly scheduled COVID-19 update to the Fulton County Commission.

“It is based on a continued path of what we’re doing in Georgia as far as social distancing measures and everything else,” said Doug Schuster with Emergency Management Services International, which is helping the county with its COVID-19 planning and response. 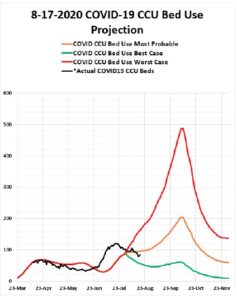 Click for a larger version of this side, or use the link at the bottom of the page for the full presentation.

Via video conference, Schuster showed commissioners a graph with a spike in October.

On any given day in July, about 80 to 100 critical care beds have been in use for COVID-19 in Fulton.

Fulton has more critical care hospital beds than just the ones used for COVID-19. And it has new capacity from the state at the Georgia World Congress Center.

But the COVID-19 demand comes on top of heart attacks and anything else that would normally fill hospital beds.

The University of Washington model he presented makes fairly similar predictions to the other four prevalent models that Fulton also looks at, Schuster said.

The model assumes that mask-wearing and social distancing will be about as spotty as they are now, and that the virus will spread within schools and colleges this fall, among other things. One source of data it uses are pings from mobile phones, which tell how much people are moving around.

At just about the same time as Fulton commissioners were meeting via video conference Wednesday, Gov. Brian Kemp was taking questions from reporters about the state’s COVID-19 response.

That was, about a day after the Atlanta Journal-Constitution reported on a leaked White House report that had President Donald Trump’s coronavirus task force recommending Georgia take more measures to stop the virus spread, like limiting gatherings to even fewer people.

The Republican governor attacked what he called “biased” reporting, said the media never focused on the good numbers and suggested politics were behind the leak of the White House report.

Kemp gave some reassuring statistics — like COVID-19 hospitalizations being down 18.8 percent since July 30.

But he also doubled down on his light-touch record on pandemic mandates so far and suggested cities enforce gathering bans and other measures.

The reason the state shut down in the beginning was to build up supplies like personal protective gear and hospital capacity, Kemp said Wednesday.

“I can promise you, we will continue to do that, we’ll fight to protect lives,” Kemp said. “But we also have to focus on livelihoods.”

Schuster, back at Fulton County, also said that very recently, some bad indicators have indeed leveled off or dropped.

But Schuster also said there is still an unhealthy level of cases.