The giant peach that for years has dropped to mark the New Year in Atlanta spent New Year's Eve 2019 in the Fulton County Government Center. Credit: Maggie Lee

The Peach Drop will be back next year, says Fulton County Commission Chairman Robb Pitts.

“If we have anything to do with it, I think I can unequivocally say there will be a Peach Drop next year, somewhere,” Pitts said on the second-to-last day of 2019.

Now it’s a question of where it will be and who will pay for the event.

The giant peach spent this New Year idle in the lobby of the Fulton County Government Center downtown, where Pitts announced his resolution on the second-to-last day of 2019. 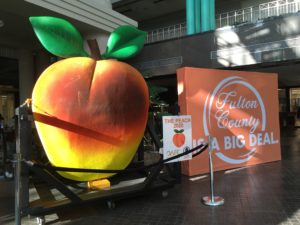 The giant peach that for years has dropped to mark the New Year in Atlanta spent New Year’s Eve 2019 in the Fulton County Government Center. Credit: Maggie Lee

For 30 years, the peach dropped from a tower at Underground Atlanta, to mark the turn of the year, save a 2017 shift to Woodruff Park.

The giant peach itself belongs to a marketing company. But an event that can attract tens of thousands of people needs some coordination and an official host.

In November 2019, Atlanta Mayor Keisha Lance Bottoms announced she was hitting pause on the peach. In an interview on Majic 107.5/97.5, Bottoms said: “We’re going to take a break, reevaluate, reexamine the location and how we plan it out.”

Pitts said Fulton would like the event to be bigger and better in the future and he thinks a public-private partnership is the way to go. He said Fulton folks will be talking to the city of Atlanta, the state (which owns Centennial Olympic Park and the Georgia World Congress Center,) potential corporate partners and the nonprofit community.

“You see New York City, you see Las Vegas, you see Los Angeles,” Pitts said. “Through the years, Atlanta has worked itself into that mix because of this peach, and I think it’s important to continue that.  People have come to look forward to it, have come to be excited about seeing it.”