Does the future look like the Better Care Reconciliation Act, or the Healthy California Act? 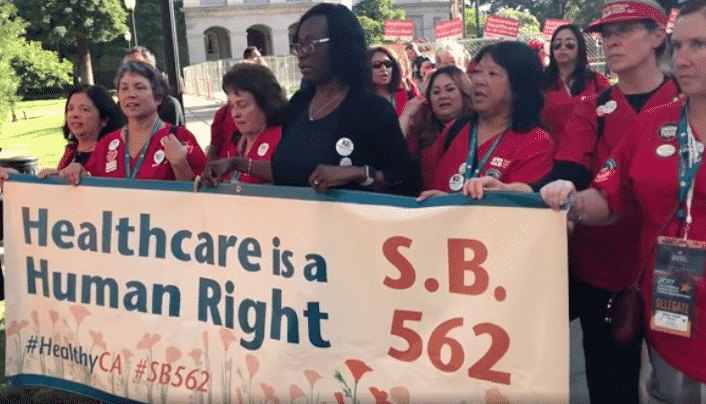 As befalls many an ambitious bill when legislatures head into the home stretch, the Healthy California Act got the hook last Friday. But as confusion mounts in Washington, there are good reasons you should know about this bill which sounds like a brand of smoothy.

The Healthy California Act would have replaced Obamacare and/or the Republican health care plan with a statewide, single-payer system in which the state would negotiate prices with health care providers and every resident of the state would be covered. It passed the California state Senate, but last week Assembly Speaker Anthony Rendon pronounced it “woefully incomplete” and stuck it in the Rules Committee for the rest of the session, which ends for this year in September.

This is the first year in a two-year session, so the bill could be brought back next year. Given the current status in Washington of what in its current form is called the Better Care Reconciliation Act, there’s no reason to think it won’t. About the only sure signal from Washington is that things are about to get worse, leaving California with increasing incentive to go its own way.

According to a legislative analysis, a single-payer system like the one outlined in the bill would cost $400 billion a year, which even by California standards is an eye-popping number. The California Nurses Association, which is the main sponsor of the single-payer bill, paid the University of Massachusetts at Amherst to conduct its own study, which estimated the cost at a slimmer $331 billion a year. Since Californians already spend $368.5 billion on a system which leaves millions uninsured, the group argued, the bill would actually result in a savings of $37.5 billion.

An official of the nurse’s group called Rendon’s decision to yank the bill a “cowardly act,” but it seems to have been generally understood this was a first swing at the idea. In polls, Californians like the idea of a single-payer system but they don’t want to pay higher taxes to get it.

The Healthy California Act sounds like just the opposite of the Senate’s attempt at a healthcare bill, which like the House version slashes taxes and eliminates care for millions, while propping up the private insurance market which the California bill envisions eliminating. But the effect of what Republicans in Washington are contemplating will be to put enormous responsibilities on the backs of the states with no clear guideposts for coping with these new demands. The Healthy California Act is just the first version of how the states might respond.

It was a milestone of sorts when the New York Times ran a story on its front page Saturday about how middle-class retirees could be forced out of nursing homes by the proposed changes in the Medicaid system. That marked the emergence at last of the true third rail in the health care debate. There have been suggestions the final version of the Republican bill could include some provisions for families to assume some of the nursing home costs now paid for by Medicaid.

Since for most families, Medicaid doesn’t kick in until the older patient has exhausted all the savings that might have been passed on to a younger generation, this idea is particularly explosive. It would catch some wealthier families which have found imaginative ways to exhaust an older member’s bank account, but it would force many more, less affluent families into excruciating choices. That’s why something like the Healthy California Act may not sound so flaky as time goes by.

Remember that Medicaid was paying for most nursing home beds when Barack Obama was still a child. Both the House and Senate healthcare bills have been more about rolling back Medicaid than repealing Obamacare.

Here’s another anachronism which has seeped into the healthcare debate. The idea that enough of a consensus exists around the need for a broad restructuring of corporate business tax structure to bring it in line with world standards has been around for a long time, and much longer than Obamacare. Yet the reason Congress can’t get to any portion of tax reform is that the question of the taxes imposed to pay for Obamacare have to be dealt with first.