With love to Garcia Marquez, one word at a time 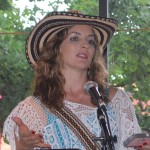 Sonia Fernandez, an Atlanta photographer who grew up in Colombia.

On a day that seemed so damp that fish could have come in through the door and floated out the windows, lovers of the writing of Gabriel Garcia Marquez (March 6, 1927 – April 16, 2014) gathered at Kavarna coffeehouse in Decatur to pay their respects by reading from his timeless stories of families, war, death, and above all, the magic of love.

Love of a couple suffocated by oregano and roses. Love of a woman for a man whose identical twin fooled her into love without knowing. Love of a creature so beautiful that “some men who were easy with their words said that it was worth sacrificing one’s life for a night of love with such an arousing woman, the truth was that no one made any effort to do so.”

They came to 100 Readers of Solitude, named in homage to the author’s greatest novel “One Hundred Years of Solitude (Cien Anos de Soledad),” but a misnomer in the sense of 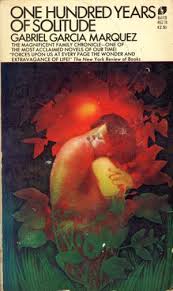 how united the crowd became as the hours of reading unfolded, as each read aloud in English or Spanish a favorite passage from a worn paperback or sleek tablet. Some tripped over the pronunciation of names like Aureliano Buendia, but the foibles were part of the event’s charm, and one by one they read vigorously, declaratively, and with humor, reflecting how Garcia Marquez wrote.

“He writes the essence of the true love,” said one of the event’s first readers Sonia Fernandez, an Atlanta photographer who grew up in Colombia, where Garcia Marquez remains a national treasure affectionately nicknamed “Gabo.” “No matter how wrong or weird the other person who we love, there is a true love that lasts forever, that passes eternity.”

Organizer Charles McNair, an Atlanta novelist (“Pickett’s Charge”) and columnist for Paste magazine, has never had seventeen male children by seventeen different women and they were exterminated one after the other on a single night before the oldest one had reached the age of thirty-five. He has not survived fourteen attempts on his life, seventy-three ambushes, and a firing squad. 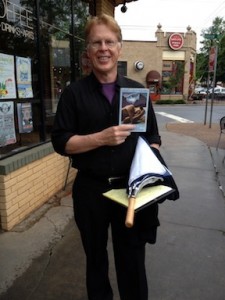 But he put together this event because he loves the imagination of Garcia Marquez and writing that “jerks you into awareness of what is great about this life.”

Ultimately, the event ran out of time at 6 pm and 75 readers, with McNair and  others on deck to make 100. “GGM must be smiling somewhere, preparing to rain yellow flowers on yet another world or to set angels out to sea on an open boat again,” he said afterward.

Event readers included young Christina Jordan, whose father Alan reads from the “Big Mama’s Funeral” short stories to his children at bedtime and who whipped through “100 Years” in less than 24 hours. Also at the mike were Jorge Alberto Lawton, former translator for Garcia Marquez; Janet Hidalgo Russell of Roswell; Sports Illustrated writer Thomas Lake; poet Kodac Harrison; and Rupert Fike, who is organizing 30 readers on May 31 at Java Monkey to read aloud “Song of Myself” to commemorate Walt Whitman’s 195th birthday.

They were following a long line of readers left bereft when Garcia Marquez died last month at age 87. His New York Times obituary noted that he was “among a select roster of canonical writers—Dickens, Tolstoy and Hemingway among them—who were embraced both by critics and by a mass audience.” Salman Rushdie eulogized him: “No writer since Dickens was so widely read, and so deeply loved, as Gabriel García Márquez.”

Why this reader loves Gabo 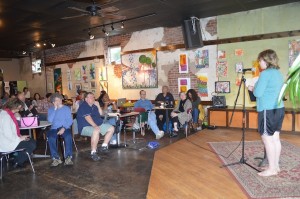 Kavarna hosted 75 speakers in five hours who read aloud from the works of Gabriel Garcia Marquez.

My faded copy of “Love in the Time of Cholera” accompanied my laptop and camera to Kavarna, one of the very few books I have read more than once and one I plan to read again to mark Garcia Marquez’ passing. The first time so mesmerized me that as the pages dwindled I began slowing my pace, savoring the sentences like a box of rich chocolates, wishing that the spell of the book could stay forever. In the tale of Florentino Ariza and Fermina Diaz, I recognized love that was epic and funny and messy, and some of the mystery that was playing out in my real life.

In 1991, I was newly wed to a man whose recitation of the opening of “100 Years” had intrigued me: Many years later, as he faced the firing squad, Colonel Aureliano Buendia was to remember that distant afternoon when his father took him to discover ice.

How deftly Garcia Marquez enticed the reader with an immediate threat, a parental connection, and a description of a tangible everyday object with a strong sensory connection. Someone who could write this way was genius; that my man had memorized it confirmed to me great taste and intellect.

Though we never expected in daily Atlanta life to see a child with a tail or a woman ascending to heaven with the laundry off the line, we experienced our own transcendence. In the aching unrequited lines of “Cholera,” my honeymoon state of love felt that much more abundant; the magic that Garcia Marquez wove on the page made my new phase of life even more intense. I was a recovering English major who had forced myself to finished required reading, and these novels rekindled the sheer love of a story well told, for sentences that made me stop with envy and awe.

I read “100 Years” in a winter camping trip to a primitive area of Cumberland Island, soaking in the words while treading the long flat path to the tiny church which a few years later would become famous for hosting John F. Kennedy’s wedding. Walking and reading mimicked the rhythm of Garcia Marquez’ writing. Once you got going, as my husband pointed out, it was hard to stop and if you did, it was hard to re-start. A reader in love always perseveres.

We planned to both read at Kavarna, the day before our 24th wedding anniversary. But life now is complicated and love more practical. Caring for a sick child, starting a new job, keeping up commitments to our community, making this column’s deadline—all weighed heavily on my beloved. How could he do it all?

I offered to go and write for him. This column is my anniversary gift. “I want to be stronger,” he said. We are strong together, I thought while writing this. Love is real and magic and who says making a deadline isn’t its own romance? In the rain-drenched world of Macondo, or the brick walls of a Atlanta coffee house, anything is believable if rooted in the real.