Gator seasons ends with 13-footer from Lake Blackshear in headlines

At some point in the battle with the alligator, the hunters probably stopped thinking about the record book. 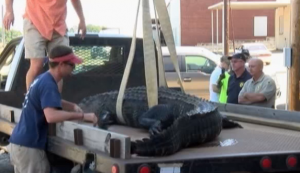 This 13-foot alligator was taken from Lake Blackshear near the end of the 2014 gator season. Credit: WPEC-TV

Which may be just as well. Because the alligator they killed after a four-hour fight last week was nearly a foot shorter than the record-setting lizard taken last year.

But the alligator that hunters took Oct. 2 from Lake Blackshear did measure 13 feet and weigh in at 660 pounds, according to media reports. The beast took six bullets to kill before it could be dragged to a small boat and motored ashore.

Gator hunting has emerged as a booming business in Georgia, and other states with significant alligator populations. No doubt the popularity of the reality TV series “Swamp People” on the History Channel is fueling the interest.

This year, more than 10,000 hunters were expected to apply for just 850 gator permits Georgia issued. The month-long season ended Oct. 5.

The gator taken at Lake Blackshear drew attention partly because a camera was present to record the creature being loaded onto a scale and truck.

Gator records are measured in inches. At 13 feet, the creature killed on Lake Blackshear measured 156 inches.

This 660-pound alligator was killed by six shots on Lake Blackshear. Credit: WPEC-TV

But in terms of record size, this one isn’t even close.

The longest gator caught in the past 11 years is 167 inches. Most gators that were record-setters during those 11 years is from 160 to 163 inches.

Greg Waters, who oversees the alligator program for the Georgia Department of Natural Resources, said the official tally of this year’s gator season won’t be known for some time.

So far, Waters said, he’s had more than 150 alligators reported. He expects the number will increase as hunters report their take.

Hunters have until Oct. 15 to check their alligator hide into a DNR office to get something called a CITES tag.

If the scale is correct, this gator taken from Lake Blackshear weighs 660 pounds. Credit: WPEC-TV

These tags are part of the monitoring system of the alligator season. CITES tags must remain attached to the alligator hide until it is processed – tanned, mounted, or exported from Georgia, according to DNR regulations.

Alligators no longer are listed as an endangered species. Actually, their resurgence is now portrayed as an example of successful environmental stewardship.

The alligator population has recovered from losses caused by heavy hunting and loss of habitat that drove them toward extinction. In 1967, alligators were added to nation’s list of endangered species.

The situation has improved. According to National Georgraphic: