Gay marriage in Georgia? Not if, but when, forum participants say

Ten years ago, banning same-sex marriage was so in vogue that 3 of every 4 Georgia voters approved amending the state constitution so only men and women could marry each other. 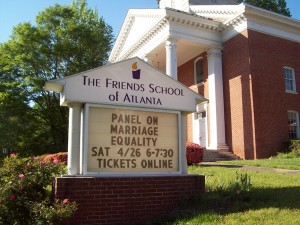 The Friends School forum was held within days of a gay rights group filing suit against Georgia’s constitutional ban on gay marriage.

Last weekend, several prominent gays and lesbians spoke of how lives and society will transform when—not if—the marriage ban is overturned. They spoke the same week that Lambda Legal, a gay rights group, filed a lawsuit in U.S. District Court in Atlanta seeking to overturn the state of Georgia’s constitutional ban on same-sex marriages.

The promise of “marriage equality” drew more than 100 people to the “Beloved Community Dialogue” Saturday night at The Friends School of Atlanta, a moment that showed how far the issue has moved away from moral debate to a question of timing and expectations.

One giant change will be for children in families headed by same-sex parents. Panelist Susan Barrett, a psychologist and a expert on same-sex couples who raise children without the benefit of legal status, said legalizing same-sex marriage will give children access to financial benefits such as health insurance and the psychological benefit of having their families validated “as good too.”

But Conrad Charleston, 22, an activist who at 14 organized a demonstration of 200 marchers (the largest gay rights rally in Knoxville, Tenn.) pointed out, “I know that marriage is not going to be the checkmark that says ‘freedom from homophobia in the United States of America.’

On the cusp of change, a look back 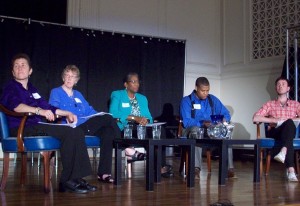 Shahar talked about her own case, and how, despite losing it, the groundbreaking precedent it set in establishing that gay relationships must be protected under the U.S. Constitution.

“That was huge,” Shahar said.

Moderator Fulton County Commissioner Joan Garner, who represents the Sixth District, lives in Old Fourth Ward with her partner, Fulton State Court Judge Jane Morrison. She talked about how “marriage equality” has changed how she tells her story.

She recalled witnessing, as a teenager, the riots that broke out in Washington, D.C. following the assassination of Martin Luther King Jr.

“I knew then I wanted to work for social justice,” Garner said. “I declared that I was going to marry a politician in Washington, D.C. and tell him what to do … fast forward 46 years, I guess I am the politician I was supposed to marry.” 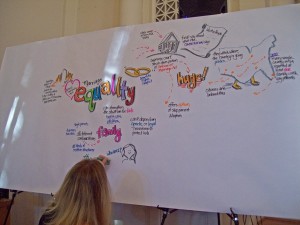 The Georgia case follows a series of lawsuits that have been filed in other states after the U.S. Supreme Court in 2013 struck down the 1996 federal Defense of Marriage Act for denying due process for gay couples. Lower court judges have cited that ruling in striking down same-sex marriage bans in Virginia, Texas, Utah, Michigan and Oklahoma, and in ordering Ohio, Kentucky and Tennessee to recognize the marriages of gay men and lesbians from other states.

But how much difference will this societal change make? Charleston rattled off figures for gay teens that he said haven’t changed much since he came out a decade ago: 30 percent of teen suicide victims are LGBT, 9 of 10 are victims of bullying, and compared with straight teens they are 40 percent more likely to be attacked by family members.

The idea of marriage as a battle in an ongoing war was reinforced by the name of a grassroots movement promoting gay marriage: The Love Under Fire Campaign. Its leader, church deacon Branden Mattox, took part in the panel.

“I have a fervent faith that marriage equality is indeed coming to Georgia,” he said. “It is just matter of when.”