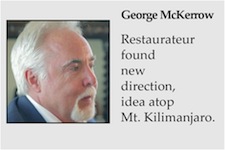 George McKerrow, co-founder/CEO of Ted’s Montana Grill, had a Y2K self-discovery Moment 19,365 feet above sea level that transformed his life, lifting him to both business success and personal fulfillment.

George’s legend began with his 1981 creation of the casual dining concept, LongHorn Steakhouse. The first LongHorn, opened as a neighborhood restaurant on Peachtree Road in Atlanta, had a shaky first few months but turned around during the city’s infamous January 1982 Snow Jam when George threw open the doors to welcome stranded residents. The eatery soon evolved into a successful chain that later evolved into RARE Hospitality International (now a part of Darden Restaurants).

As a restaurant executive with RARE, George was immersed in corporate success, developing beneficial Wall Street connections and helping build the publicly traded company. Near the end of 1999, as the world was bracing for projected computer breakdowns on “Y2K” – January 1, 2000 – George and his wife, Ginair, decided to escape the madness and take a trip to the remote east African country of Tanzania to climb Mt. Kilimanjaro.

After five days of hiking with the normal trials and tribulations that accompany the journey to the mountaintop, the two reached their goal: standing on top of the mountain, welcoming the new year and millennium at midnight Atlanta time.

Looking out on the mountains and valleys below, George began to reflect upon his career and his early business challenges and successes with his entrepreneurial neighborhood restaurant. At that Moment, he realized what had been missing during his successful steps up the corporate ladder.

“I realized I was recently missing something in my inner spirit,” he said in our accompanying Moments HD video. “I had this Moment that said to me, ‘what really made me happy was my entrepreneurial spirit.’ I made a decision right then and there to change my life.”

Returning home to Atlanta, George gave RARE Hospitality his resignation and left his post as CEO and chairman a few months later. With a non-compete agreement in his hand, he said he “went home and started to think.”

He soon began to put together a new idea for another brand of restaurant, one that would build upon media mogul Ted Turner’s attempts to save the American bison, which had dominated the American Plains until approximately 50 million were slaughtered in the 19th Century, reducing the herd to just a few hundred and near extinction. Ranchers worked together to save this great American species and Ted Turner, the second largest private landowner in the U.S., was instrumental in trying to find a commercial market and a return on the ranchers’ investment.

He put his idea down on paper, and showed Ted the business plan in May 2001. Ted called George into his office – which he admits was a little intimidating with 37 Emmys, America’s Cup and a World Series trophy adorning the outer hallway. 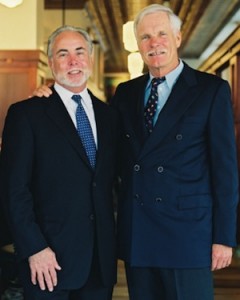 George McKerrow, left, with Ted Turner at their restaurant

Ted’s Montana Grill opened in January 2002, two years after George’s Moment on Mt. Kilimanjaro, and to this day, that handshake remains the only formal agreement between the two entrepreneurs in their successful restaurant venture.

“All we have is our friendship and that handshake and we’ve created a company that we are very proud of that’s helped save the bison industry,” he said.

Ted’s Montana Grill features the largest bison menu in the world and has initiatives that provide incentives for ranchers to actively grow their herds. Additionally, Ted’s strives to be environmentally sustainable with paper drinking straws, recycled and recyclable products, solar panels, reuse of cooking oil, efficient lighting and a green program that recycles more than 370 tons of plastic, glass and aluminum each year.

Today, Ted’s Montana Grill has 44 restaurants in 16 states with plans to grow more. George’s entrepreneurial spirit drives him to seek continual growth and the company’s goal is to double its locations by 2021, without going public and continuing to use internal resources.

For George, Ted’s Montana Grill isn’t just another business success like the concepts he created with RARE Hospitality; it’s a business concept that exercises his innate entrepreneurial instincts. While his drive was born with him, he thanks his journey up Mt. Kilimanjaro for uncovering a pristine understanding of how he should live life to be happy.

“Being an entrepreneur is really more important to me than anything else for my inner peace, happiness and the way that I can live the rest of my life and still fulfill my wants, needs and desires,” he said. ““I thank that hike for that Moment and changing my life.” 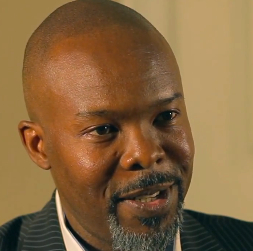 Next week in Moments: Alwyn Fredericks

Next week in Moments: Alwyn Fredericks, husband, father and attorney, who woke up one night feeling chest tightness and found he had the “widow maker.”