Georgia has declared an additional 407 miles of rivers and coastal waterbodies safe for recreational use at the request of those who want to paddle or swim in the waters.

The upgraded classification of 14 bodies of water means they are deemed safe for “general recreational activities such as water skiing, boating, and swimming, or for any other use requiring water of a lower quality, such as recreational fishing,” according to guidelines used by the Georgia Department of Natural Resources.

Of the 14 water bodies, four are north of Macon, four are in the piedmont or South Georgia and six are along or near the coast. The board that oversees the DNR approved the changes at its Jan. 289 meeting, which was convened on St. Simons Island.

The state’s review process does not require any water to be tested. There was no monitoring for bacteria or hazards that drain into waterbodies, under the procedure used by the DNR.

The process provides for a review of land uses within 10 miles of the waterway being considered for an upgrade to recreational use. According to DNR’s guidelines, the review involves looking for “human health concerns” from point sources including sewer treatment plants, and non-point sources including “agricultural land, landfills, airports, urban areas, livestock chicken house PFAS [manmade chemicals], or hazardous waste sites.” 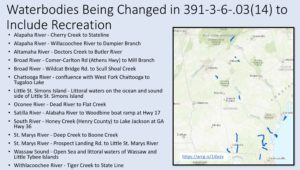 Examples of river segments that were approved for the recreational classification include the Chattooga River, from its confluence with the West Fork Chattooga to Tugaloo Lake, and the Oconee River, from Dead River to Flat Creek. Both were nominated by the Georgia River Network, with the Oconee River Greenway Foundation joining in the nomination of that waterway.

In addition, a segment of the South River that’s adjacent to its southern terminus, at Jackson Lake, was granted recreational status. The segment stretches from Honey Creek, in Henry County, to Lake Jackson, at Ga. 36.

Two segments of the South River, which flows from East Point through Atlanta and DeKalb County, exemplify portions of a waterway that were rejected for upgrade to recreational use. The South River is one of the nation’s most endangered rivers because of sewage pollution, according to the 2021 designation by American Rivers, an environmental advocacy organization.

The two segments of the South River rejected for recreational designation stretch from Panola Shoals to Pole Bridge Creek, and from Pole Bridge Creek to Honey Creek in Henry County. Both segments failed the test because of bacterial contamination concerns.

The Georgia DNR board voted to upgrade the following waterways to recreational status:

Note to readers: The DNR has opened the next round of applications for upgrading a waterway’s classification to recreational. Notice of the 2022 Triennial Review was distributed on Jan. 27. The first public hearing is scheduled to be virtual and slated for March 22. For more information click here.