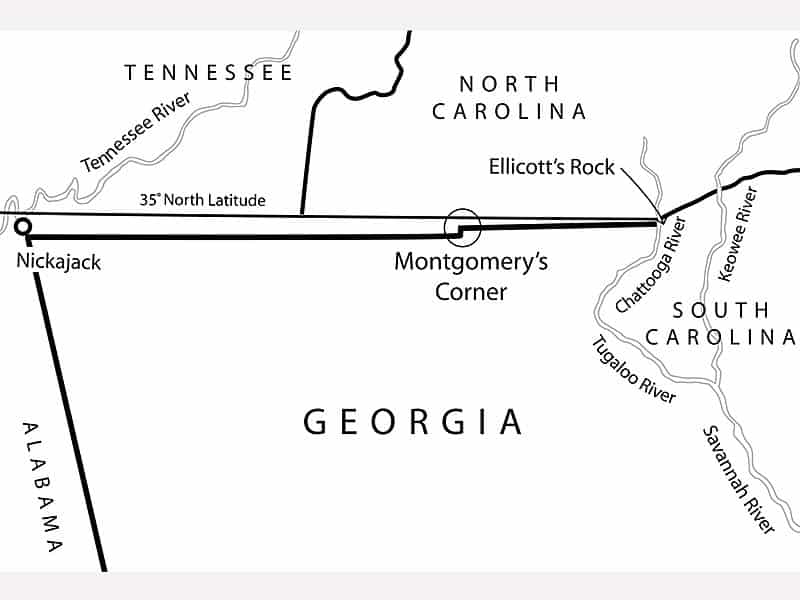 What does Georgia — more specifically, Atlanta — need to thrive? Today, like many large and expanding metropolitan areas across the United States, it needs water. The drought of 2008 in Georgia brought renewed attention to the fact that if the Georgia/Tennessee boundary had been properly surveyed along the 35th latitude, then plenty of water from the Tennessee River would be available for Georgia’s citizens. This is the story of Georgia’s mismeasured northern boundary.

Here’s what happened. The 1783 Treaty of Paris ending the Revolutionary War gave the new United States ownership of the lands west of the Appalachian Mountains to the Mississippi River. Over the next 10 years, all of the 13 colony-states, except Georgia, ceded their claims to those western lands to the new federal government. It took another 10 years before Georgia agreed to sell her western property to the U.S. government for $1.25 million — the only colony-state to receive compensation for the cession. The 1802 Articles of Agreement and Cession provided that Georgia’s new western boundary would be “a line from the great bend of the Chattahoochee River and thence in a direct line [north] to Nickajack [an Indian settlement] on the Tennessee River . . . running up the said Tennessee River and along the Western Bank thereof to the Southern Boundary line of the State of Tennessee.” 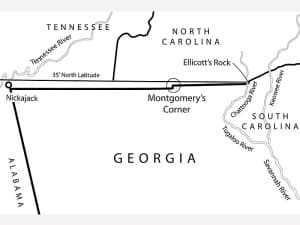 No survey of Georgia’s new boundary was done until 1817, when the Alabama Territory came into being. Georgia and Tennessee, now concerned about their state boundaries, quickly agreed to survey their common corner at the 35th latitude north. Tennessee appointed a team of surveyors and mathematicians as did Georgia, who chose mathematician James Camak and surveyor Hugh Montgomery. The field work began in 1818, and rather than following the described boundary line crossing the Tennessee River, both teams determined that the “35th parallel north was two miles south of Nickajack,” which Tennessee’s Code of 1819 describes as “one mile and twenty-eight poles due south from the south bank of the Tennessee River as found by mathematician James Camak.”

These words would haunt Georgia for the next 200 years, since the actual 35th latitude north is in the middle of the Tennessee River. Georgia also passed a resolution in 1819 authorizing the governor to have the map of the surveyed lines recorded in the Surveyor General’s office, but there is no record of any law or act certifying or approving the survey as the official boundary between the two states.

As part of the 1818 survey, Camak and the Tennessee teams continued eastward for another 110 miles and made a mark at what they believed to be the eastern boundary of Georgia and Tennessee. In 1819 Georgia asked North Carolina to appoint a survey team to meet with Camak and mark their mutual boundary. Both teams met at the Chattooga River in northeast Georgia at a monument made by the famous astronomer-surveyor Andrew Ellicott, who had been asked by Georgia in 1811 to mark the 35th latitude at the junction of Georgia, South Carolina, and North Carolina. 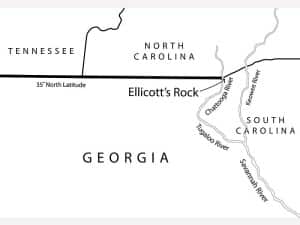 Starting at what is called Ellicott’s Rock, the teams surveyed the 35th westward for the next 35 miles until they came to the location where Camak and the Tennessee team had stopped their survey the year before. Unfortunately, the lines did not connect: the westward line was almost one-half mile north of the termination of the eastward line. Astonishingly, rather than correct their mistake, the teams simply marked a vertical line southward connecting the two lines. This offset, named Montgomery’s Corner after surveyor Hugh Montgomery, who had been on both surveys, is on every map of Georgia.

That wasn’t the end of it. In 1826 Georgia and the seven year-old state of Alabama agreed to survey their common boundary beginning at the great bend of the Chattahoochee River (located at West Point, Georgia) and then northerly to Nickajack, as provided for in the original 1802 Articles of Agreement and Cession. Georgia again appointed Camak to work with the Alabama team. Camak’s location of Nickajack was “about one quarter of a mile north of the Georgia-Tennessee boundary as surveyed in 1818.” Georgia’s northern boundary was now a mile south of the 35th latitude.

Camak’s confusing explanation is thus: “In 1826, I used three sextants . . . and have not much confidence in their accuracy. The tables I used were good with the exception of typographical errors. Taking everything into consideration, I am inclined to give a preference to the results of 1826.” The 1826 location of the 35th latitude north, as south of the Tennessee River, is the lawful northern boundary of Georgia and the reason why Georgia cannot take water out of the river for her citizens.

There have been several feeble attempts by Georgia over the past years to change the boundary, none of which have ever made significant progress.

Previous Article
‘Hello, My Name is Doris’ doesn’t come close to its potential
Next Article
Why Uber Atlanta is Proud to Support MARTA’s Expansion