A ceremonial ground breaking was held Thursday afternoon on two new towers totaling 400,000 square feet and expected to cost about $200 million, according to Georgia Tech President Ángel Cabrera. The two new towers will be built across from the historic Biltmore hotel on the block bordered by West Peachtree Street, Fifth Street, Spring Street and Biltmore Place.

The three families of philanthropists who contributed to the towers were present for the ground breaking. 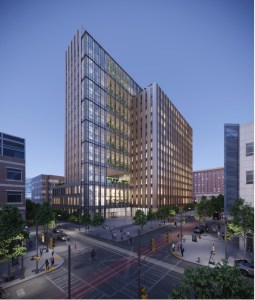 A rendering of the two new towers on the Georgia Tech campus seen from Spring Street looking northeast with the Atlanta Biltmore in the background (Special: Georgia Tech.)

The George Tower will be named after Penny and William “Bill” George. It will house the top-ranked H. Milton Stewart School of Industrial and Systems Engineering in addition to other programs. Milt and Carolyn Stewart were present, and their son, Jeb Stewart, made remarks.

The second tower will be called the Scheller Tower, and it will house Georgia Tech’s graduate and executive education programs that are part of the Ernest Scheller Jr. College of Business. Ernie and Roberta Scheller also were in attendance.

“Two years ago, when I got on the telephone with President Cabrera, I asked him: ‘When are we going to start this thing? I’m 91 years old. I want to live long enough to see this happen,’” Ernie Scheller said Thursday. “I’m 93 now. Well, I have.”

In his opening remarks, Cabrera remembered when he and his wife attended Georgia Tech. That part of Midtown largely consisted of parking lots and low-rise buildings that once housed an automobile dealership. “There were not many reasons to go to Midtown,” he said.

Wayne Clough, president of Georgia Tech from 1994 to 2008, championed a vision for Georgia Tech to jump the interstate and expand the campus to what is now the heart of Midtown. The Georgia Tech Hotel and Conference Center was built in 2003. Developer Kim King then built a complex just north of the conference center.

Eventually, the Georgia Tech Bookstore and the Tech business school were built east of the conference center. 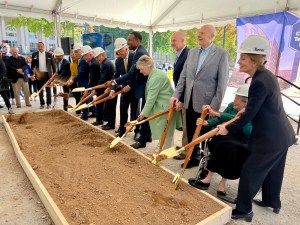 Dignitaries participate in the ceremonial groundbreaking on Oct. 20 of Tech Square III. (Photo by Maria Saporta.)

“Projects like this, they are not sprints. These are relay races.” Cabrera said. “Wayne had a vision. At the time it was not obvious. Now it all seems inevitable. Wayne got it started.”

Then Cabrera said the effort was continued by George “Bud” Peterson, who built the second phase of Tech Square with the CODA development. Peterson, and his wife, Val, attended the ground breaking.

When he became Georgia Tech’s president in September 2019, Cabrera said there was a folder on his desk with plans for Phase III of Tech Square, a project that he described as both an honor and “sometimes a headache,” explaining the project is very complex.

“I love the metaphor of the relay,” said Sonny Perdue, chancellor for the Georgia Board of Regents. “I don’t know how many more laps we have to go.”

Atlanta Mayor Andre Dickens, who seems to be at just about every event in the city, also remembered when he attended Georgia Tech when the vision for Tech Square was being developed. 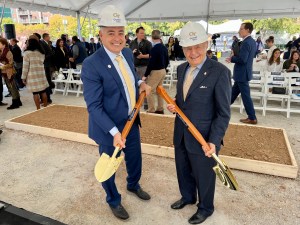 “Tech Square has reinvigorated this corner of Midtown,” Dickens said. “It is one of the most sought-after addresses in the entire country.”

“My four years at Georgia Tech did more to impact my life than anything I have done ever since,” said George, embracing the development of Georgia Tech’s innovation district. “I spend a lot of time in Silicon Valley. Too much concentration [of technology enterprises] in one place leads to problems.”

Cabrera said about $75 million of the project is coming from philanthropy, $40 million from the State of Georgia, and the rest is coming from institutional investment and longer-term financing.

When asked if he planned to attend the ribbon-cutting of the building, Ernie Scheller poignantly said: “That’s a good reason to stay alive.”