A credit upgrade for a Georgia utility is the latest outcome of the resolution of a contract dispute among partners building the only nuclear facility under construction in the nation, Plant Vogtle. 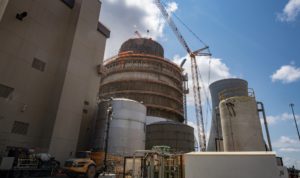 The dispute was part of the ongoing challenge that has become Plant Vogtle, the long-delayed project that has $12 billion in federal loan guarantees that began under the Obama administration. Georgia Power affirmed the first of two reactors will open in November 2021, followed by the second in November 2022, according to the semi-annual report filed Aug. 31 with the Public Service Commission.

Moody’s Investors Service has delivered two upgrades over the course of four weeks to the Municipal Electric Authority of Georgia, one of the partners in the Vogtle project. The ratings affect $2 billion in debt:

The increased ratings still leave the rating in the lower third of Moody’s rating scale of investment grade debt.

These rating actions come on the heels of the settlement agreement signed July 30, and executed Aug. 13, between MEAG and another partner in the syndicate building the nuclear reactors – JEA and the city of Jacksonville, Fl.

JEA sought to amend terms of the deal as the Plant Vogtle construction project encountered continuing delays. JEA filed a lawsuit in 2018 to resolve the dispute in court.

U.S. District Judge Mark Cohen, in Atlanta, presided over the litigation. Cohen ruled June 17 that the original agreement was valid, as signed by MEAG and JEA. That decision led to the settlement agreement signed the next month.

MEAG walked away with an annual payment from JEA that could reach $1.2 million. Over the life of the 20-year agreement, the payment is to top $20 million.

Terms call for the payment to be made in the form of an additional 75 cents for each unit of energy delivered from Plant Vogtle to JEA. The energy unit is 1 megawatt hour, which represents 1 million watts of electricity being used for an hour.

This alone isn’t enough to settle the nerves of credit analysts. But the additional payment does represent additional security that MEAG will be able to repay its debt, according to the rating action.

MEAG and JEA issued a joint statement following the settlement agreement. It observed:

Previous Article
What those annoying campaign ads tell us about where we’re at
Next Article
Georgia Democrat, Republican fight federal court paywall