GWCCA Chair Glenn Hicks stands next to Frank Poe, the center's executive director, after the Dec. 6 board meeting. (Photo by Maria Saporta.)

Frank Poe, executive director of the Georgia World Congress Center Authority, has agreed to extend his tenure until the end of 2024.

The authority will begin a search for his successor next fall.

Poe has headed the GWCC since April 2010. He was instrumental in the decision-making process that led to the demolition of the Georgia Dome and the construction of the new Mercedes-Benz Stadium.

GWCCA also is in the midst of another major construction project — A signature hotel, Signia by Hilton Atlanta, that will be on a site between the convention center and the Mercedes-Benz Stadium. The hotel is expected to open by January 2024.

At the end of the GWCCA board meeting on Tuesday, Chairman Glenn Hicks announced that Poe and the board had agreed to extend his contract by six months. Initially, Poe had agreed to stay in his role until June 2024. 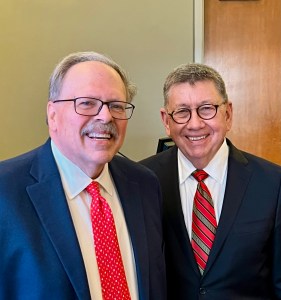 GWCCA Chair Glenn Hicks stands next to Frank Poe, the center’s executive director, after the Dec. 6 board meeting. (Photo by Maria Saporta.)

“We wanted him to be around for at least a year after the hotel opens,” Hicks said. “Then we’ve asked him to be available under a consulting arrangement for another six months if needed.”

“Literally, it will be one year after the hotel opens so it’s an opportunity for me to continue to be engaged with the board on a project that means a great deal to them and a great deal to me,” Poe said. “Seeing the operation of the hotel, it will make me feel as though I saw something through to the end.”

The GWCCA campus is one of the major economic impact centers in Georgia. According to its 2022 annual report, more than 3 million people visited the complex in the 2021-22 fiscal year. It created an economic impact of $1.37 billion, and it helped generate 16,058 jobs in the region.

Few public entities have had as stable leadership as the Georgia World Congress Center. Since its opening in 1976, the center has only had two executive directors.

Dan Graveline was in that role for 33 years. When he completes his tenure, Poe will have served as executive director for more than 14 and a half years. Both leaders were able to stay clear of politics serving through multiple gubernatorial administrations.

“Dan left a really strong foundation,” Poe said. “The bones were already here. All we did was add some Christmas ornaments to the tree.”

Boasting like any proud parent, Poe said Atlanta offers a convention and entertainment package unlike no other in the country because everything is clustered within walking distance. There’s the extensive convention center, Mercedes-Benz Stadium, the State Farm Arena, Centennial Olympic Park, a hotel on the campus and thousands of hotel rooms within walking distance. Other advantages include MARTA, which connects the campus with Atlanta’s Hartsfield-Jackson International Airport.

“I really do enjoy the authority, the board and the people I work with,” said Poe, who likely will return to the Dallas area after he completes his tenure in Atlanta. “Certainly, I want to come back as a fan. But I’ve been around large events all my life.”

Hicks marveled at the longevity of GWCCA leaders since the convention center opened.

“It’s been incredible,” said Hicks, who said GWCCA will do a national search for a successor. “It will include external and internal candidates. That’s what we did when Dan left.”