With little fanfare, Georgia has entered a new era in which road construction is to be based less on geography and more on the need for congestion relief. 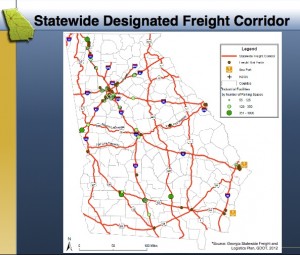 Georgia’s DOT voted last week to designate the roads marked in red as freight corridors, which can be improved without funding restraints the state had previously imposed. Credit: GDOT

The step isn’t expected to be a panacea because Georgia doesn’t have any more money than before to spend on road improvements. However, the measure does provide the state with flexibility to target the resources it does have in areas where they’re in greatest demand, according to advocates including Gov. Nathan Deal.

The board of Georgia’s Department of Transportation voted last week to adopt a list of designated freight corridors. Now, these corridors can be upgraded without the legal constraint of balancing highway spending among congressional districts. The list was envisioned in House Bill 202, which Deal signed in April.

“This bill will allow us to better prioritize transportation projects that help to create jobs, decrease traffic holdup for freight and quicken the flow of goods to Georgians,” Deal said in a statement released following a bill signing ceremony at the Metro Atlanta Chamber – nine months after voters rejected a proposed transportation sales tax in nine of the state’s 12 regions.

HB 202 exempted interstate highways from congressional balancing. That’s why potential improvements in metro Atlanta have already been touted at intersections including I-285/Ga. 400, and I-285/I-20 east and west. The bill required that freight corridors other than interstates be specifically designated by GDOT’s board. 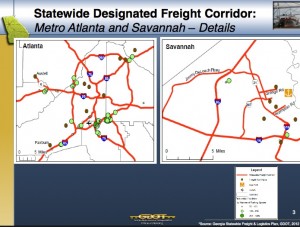 The highways marked in red, in Atlanta and Savannah, can be improved without funding restraints the state had previously imposed. Credit: GDOT

The new list of freight corridors is expected to have significant impact outside metro Atlanta, on the latticework of roads that knit the rest of Georgia with the capital city and seaports in Savannah and Brunswick.

One group in west-central Georgia already is uplifted over the inclusion on the list of a proposed highway between LaGrange and Macon. They’ve named the route “Georgia’s Export/Import Highway” and think that getting the route on the new list is a significant step forward.

“This should make it easier to fund the actual corridor study that we have been advocating for all these years,” said Lanier Boatwright, executive director of the Three Rivers Regional Commission, who supports the proposed highway.

A sturdy description of congressional balancing is contained in a 2010 report by the Atlanta Regional Commission.

The provision requires that, “85 percent of federal and state capital investment be divided equally among the 13 congressional districts, one‐third of the remainder must be for ‘economic development purposes’ statewide. The remainder is flexible as long as any district does not receive 20 percent more than any other district. Current excluded from the accounting are maintenance and operations, MARTA, GRTA, the Georgia Ports Authority and improvements on the Development Highway System.”

Before HB 202 was enacted, state law required Georgia to equally distribute, among 14 congressional districts, its state and federal highway dollars, according to a board document.

“Congressional district balancing as we know it and as it has been practiced since 1999 DOES NOT WORK!” concludes a 2008 report by Gerald Ross, GDOT’s former chief engineer. (The capital letters are in Ross’ report.)

Much of the work represented by HB 202 grew out of the Georgia Statewide Freight and Logistics Plan 2010-2050.

The report says that an investment of $18 billion to $20 billion over the next 40 years could generate upwards of $77 billion in additional economic output and the creation of “thousands of new jobs.”

The report suggests almost $10 billion on highway improvements, a task that will be facilitated by viewing them as corridors rather than slices of congressional district. The broad categories cited in the report include: