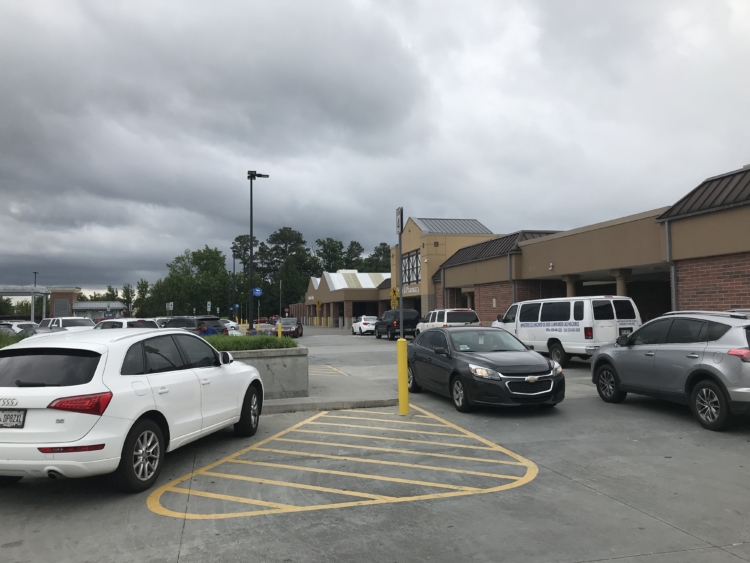 Shoppers parked close to the door of the Walmart in Chamblee as storm clouds threatened to release another of the downpours that were common in early June across metro Atlanta. Credit: David Pendered

The threat of hurricanes landing in Georgia this season is reduced by the persistence of an El Niño in the Pacific Ocean, according to a report released Friday by a climatologist at the University of Georgia – who also observed that the downpours this months have reduced the extent of drought in the state. 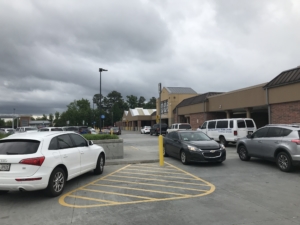 Shoppers parked close to the door of the Walmart in Chamblee as storm clouds threatened to release another of the downpours that were common in early June across metro Atlanta. Credit: David Pendered

The forecast must be a relief to those in Georgia who await money for hurricane recovery Congress approved this month – eight months after Hurricane Michael made landfall. They still have no idea when the money will arrive in their communities.

Regarding hurricanes in Georgia and the Southeast, UGA climatologist Pam Knox observed in her report:

Knox tailors her forecasts for the state’s farming and livestock communities. Knox serves as agricultural climatologist in UGA’s College of Agricultural and Environmental Sciences.

Knox noted that this El Niño weather condition is expected to last for months, citing her interpretation of a reportby the National Weather Service’s Climate Prediction Center. Knox observed:

By way of reminder, El Niño and its counterpart, La Niña, are weather patterns in the Pacific Ocean, west of South America, that impact the United States.

El Niños are associated with conditions that make it harder for hurricanes to form over the Atlantic Ocean, and with above-average rainfalls in the South, according to a reportby livescience.com. La Niñas spur conditions opposite those of El Niños.

Regarding the abnormally dry conditions, and severe drought that were declared this month in parts of Georgia, Knox observed that recent heavy rains have eased the dry conditions. 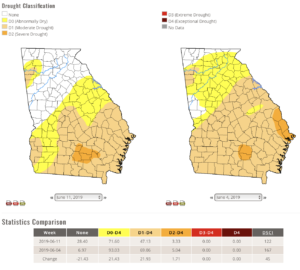 Drier weather should return in the coming week, Knox observed:

Areas of severe drought persist in central South Georgia, in an area around Tifton – a peanut-producing region. The rains eased severe drought conditions that had existed along the Savannah River, in an area upriver from Savannah. These areas are now listed as moderate drought.

Much of North Georgia is now free of drought conditions, according to the report by the U.S. Drought Monitor. Areas near Rome remain in moderate or severe drought, but the rest of the region is back to normal.

Knox’s reports on Friday mark her return from vacation with her Mom. They traveled to Alaska and the Yukon and Knox, who writes a fairly personal weather column for her readers, offered a few observations in her last post before vacation, on June 1: 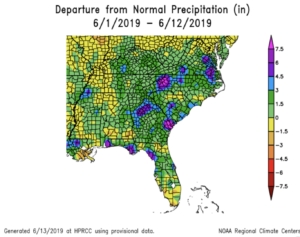 Some areas of Georgia received more than 4 ½ inches of rain this month, while North Georgia benefitted from rainfalls of up to 3 inches. Credit: site.extension.uga.edu/climate/