A Girl Scout has coordinated an art contest open to girls in middle school to design five murals that are to be painted on a concrete pillar along PATH400, in Buckhead. 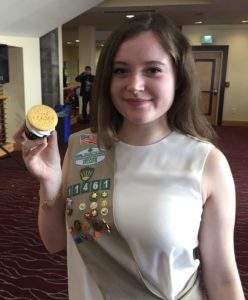 The murals are to depict plants and animals that are native to Georgia. The contest is open to girls in public or private schools in Atlanta, in grades 6, 7 or 8. Thursday is the current deadline for applications, and more information and an entry form is posted on a webpage of the sponsor, Livable Buckhead.

Katie Maier came up with the idea of a student art contest as part of her work to complete the requirements of the Girl Scout Gold Award, the highest award available to Girl Scouts. The “Picture Your Path” contest continues a personal connection Katie established with PATH400, which started when one of her artworks was chosen to be painted along the pathway.

When Katie was in fifth grade at The Lovett School, her design was chosen to be turned into a Plexiglas covering that disguised electrical boxes along a portion of PATH400, between Old Ivy and Wieuca roads. Katie’s design, “Sunburst,” was one of 10 chosen to decorate the pathway as part of the “Playing with Shadows” contest.

Now, Katie’s a rising member of the Class of 2022. Katie explained her current project in a story published in Lovett’s student newspaper, the OnLion: 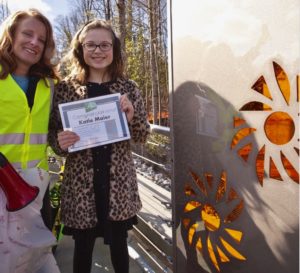 Katie’s story goes on to recall the happiness she felt at having her design for a mural permanently displayed along PATH 400. She thought that other girls might enjoy a similar emotion, and continued in her story:

Livable Buckhead is the non-profit entity coordinating the construction of PATH400. The multi-use trail is being pieced together from slivers of public land, and is to connect Sandy Springs with a portion of the Atlanta BeltLine, in an area southeast of Piedmont Hospital.

Livable Buckhead has become a significant backer of public art – some would call it graffiti – in Buckhead. Most recently, in October, 2019 the organization collaborated with MARTA’s Artbound program to select and fund a mural in a high-visibility area of Ga. 400.

Defense against unwanted graffiti is part of the purpose of the public art program. Denise Starling, Livable Buckhead’s executive director, said last year that taggers tend to not paint over someone else’s artwork. By painting murals on blank canvases that are probably going to be tagged, chances are reduced that offensive messages will be scrawled on surfaces, Starling said.

Previous Article
Your Voice Matters: CRA Reform and You
Next Article
Long-time president of Arthur Blank’s foundation to retire this year

Photo Pick: Seen on my run by Robin Triplett