The Savannah port was closed Wednesday, which provided one saving grace for metro Atlanta’s weather-clogged roads. 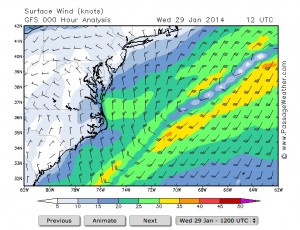 This weather map shows the strong northerly winds that have affected shipping along the east coast and in Savannah. Credit: passageweather.com

“Any truck traffic that would have been moving from the port to the city of Atlanta was eliminated or reduced significantly,” said ports authority spokesman Robert Morris.

Gov. Nathan Deal said Wednesday that jack-knifed tractor-trailer rigs on metro Atlanta roads had contributed to the region’s paralysis after wintry weather shut many roads Tuesday afternoon. A significant proportion of trucks in the region are headed to or from the Savannah port.

East-coast ports as far south as Brunswick were closed Wednesday, or operating at minimal capacity, Morris said. In Savannah, the major Garden City Terminal was closed and trucks weren’t moving, though cargo was still being loaded and off-loaded vessels.

There’s no telling exactly when shipping will resume its customary pace along the east coast.

Shipping is affected by weather. Cold, north winds offshore were blowing up to and above 30 mph, on Wednesday afternoon. Seas were running up to nine feet, according to passageweather.com. Conditions aren’t expected to moderate until Friday, according to the website’s models.

“The ports of New York and Virginia are having a very difficult time right now,“ Morris said. “There are vessels that are basically grounded in Virginia that are bound for Savannah, and I think the same is true for New York City.

“Baltimore is having trouble, though I’ve only heard that anecdotally,” Morris said. “Wilmington [N.C.] is closed. Charleston is closed. Brunswick is business as usual. Jacksonville is smooth.”

The effects of Winter Storm Leon are unfolding so quickly that the trade publications for sea cargo have not kept up. But reports from last week’s Winter Storm Janus provide insights into the impact of a major weather event.

Cargos.com reported the following closures or cutbacks on Jan. 22:

“It will take a little while to dig out on the east coast,” Morris said of the current storm.

“Savannah has it relatively mild, compared to our friends in Atlanta,” Morris said. “We’ve had a couple of bridge closings and salt down on the roads. There were some snow flurries, but not that much accumulation.”