Whether you’re searching for a new outfit, a great deal on home goods or the next step in your career, Goodwill has your back. Between all the Career Centers in the state, the company helped employ one in six of the roughly 161,000 Georgians who were hired last year.

Notably, a lot of that hard work was done in our backyard. Goodwill of North Georgia — covering 45 counties — was recently recognized as the top Goodwill in the nation for connecting folks to jobs.

Last year alone, the folks at North Georgia’s 14 career centers helped 16,000 residents find work, the most in the country. Over the last five years, they have helped employ around 100,000 people. 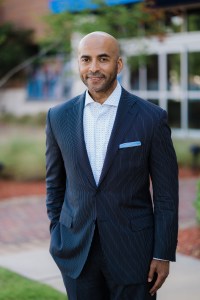 Goodwill of North Georgia President and CEO Keith Parker is proud of their impact on Georgia’s communities.

“The numbers, you can get lost in them because they can get pretty large,” Parker said. “But it’s the stories behind the numbers, the incredible number of people whose lives have changed — that’s what really feels good about what we do.”

Goodwill’s career centers, offered in-person and virtually, are designed to help anyone who comes through the door — whether it’s building a resume, finding a job quickly, helping formerly incarcerated folks navigate the workforce or walking a veteran through a practice interview.

And the team doesn’t only help in the job search. Goodwill also offers training programs that run the whole gamut of specialties, like construction, hospitality and healthcare. The company even offers an entrepreneurship program that teaches folks how to run a successful business.

Parker notes poverty as one of the largest barriers to entry into the workforce, and in a region with one of the highest income disparities in the nation and an extreme lack of mobility, this issue is especially pertinent.

Parker continued: “The number one way to move people from poverty into middle-class living is work. Our mission is to help people find a job, a better job and a career. There’s no judgment. We meet you where you are and try to help you get where you want in life.”

Goodwill is ready to meet folks where they are, and Parker added that the only requirement is the desire to get started.

“The only thing we don’t do is try to motivate people,” he said. “We will help you with everything else — you can be addicted to drugs, you can again have a criminal background, you may not have worked in 20 years — [but] we will help you find a job and get you all the training you need to be successful. The only thing we ask is that you come through the door motivated to work.” 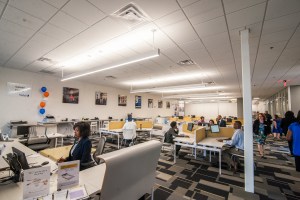 “We really encourage people to come to one of the Career Centers in person. They get to know us better and we get to know them better,” Parker said. (Photo courtesy of Goodwill of North Georgia.)

Parker told the story of one woman who came to a Goodwill Career Center because she was looking for a raise from her current $9.50 an hour. After completing a Technology Career Program, she secured a $60,000 yearly salary after about four months.

Another Georgian with over 500 arrests on his record was close to being sent to a halfway house by the courts, so he visited a career center in hopes of finding a stable job. A few months ago, he recently retired from Goodwill after “18 excellent years of service with us,” Parker said.

In the next year, Goodwill of North Georgia will continue their efforts to help all Georgians achieve their career goals.

If you’d like to support Goodwill but don’t need assistance from their career centers, Parker encourages folks to visit their stores.

“Know that if you drop off a lightly used suit, that suit becomes an interview uniform for a person who may have just come out of the criminal justice system. You can really change a person’s life by making a donation,” Parker said. “People shopping and donating feed into the ecosystem of job training and workforce development, which then creates what we have now — a billion-dollar impact on Georgia’s economy.”