“My fellow Georgians, the state of the state is resilient. And we will endure.” – Gov. Brian Kemp, 2021 State of the State message. 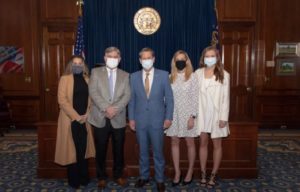 Gov. Brian Kemp (center) commended Scott Hawkins (second from left) for the resiliency displayed by the apparel manufacturer he founded, American Knits, which shifted its line to gowns and masks during the pandemic. Credit: facebook.com

With these words, Kemp on Thursday unveiled his proposal for updating the state budget that goes through June 30, and his plan for the fiscal year that begins July 1. The Legislature now has its turn at amending the governor’s proposals, after which the two branches of government are to reach consensus on both budgets.

There’s wind at the back of Kemp’s spending proposals.

Full funding of Biden’s plan isn’t expected. Congress is more likely to fund from $750 billion to $1 trillion, with another round of funding possible later in the year, Mark Zandi, chief economist for Moody’s Analytics, said Thursday at a virtual conference sponsored by The Volcker Alliance and Penn Institute for Urban Research. The stimulus factors into Zandi’s theory that in the third quarter, “the economy will kick into high gear.”

“With all that fiscal support, that’s a lot of juice and should help get the economy going,” Zandi said.

Georgia has rebuilt its reserve fund following the Great Recession and Gov. Brian Kemp has not suggested dipping deeply into it during the recession spurred by the coronavirus pandemic. Credit: Governor’s Budget Report Amended FY 2021 and FY 2022

Georgia’s reserve fund remains robust and is to remain so in Kemp’s spending plan.

The reserve fund is to remain near 10 percent of the previous year’s net revenues. This level is below the maximum ceiling 15 percent, as set in state law.

In its conservative spending approach, Kemp’s budget is in keeping with the Economic Report at the back of the governor’s budget proposal. The report is peppered with “yes, but” evaluations on a growing economy, such as:

The conclusion makes a general statement about the role of entrepreneurs in building a way out of the recession. Kemp put a face on the premise.