Gov. Nathan Deal: Would be nice if legislature didn’t have to vote on Falcons stadium-GWCCA bonds 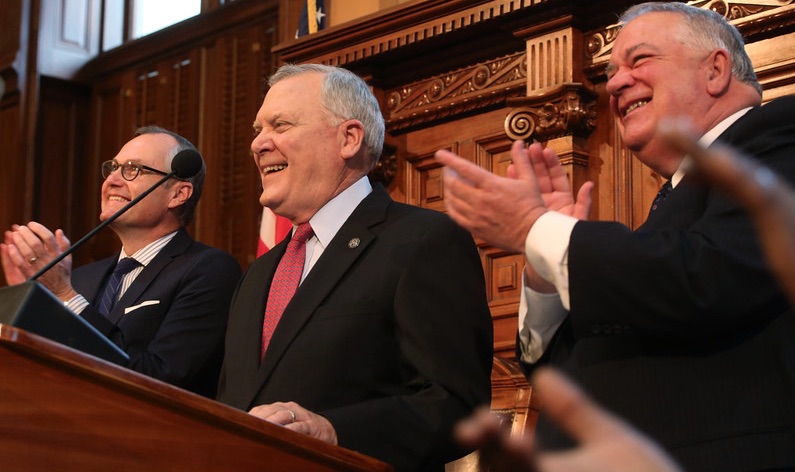 Gov. Nathan Deal confirmed Friday morning that the Atlanta Falcons and the state are exploring options that would not require approval from the state legislature.

But Deal said it is too early to know whether that would be possible.

“We are sort of in a waiting period right now,” Deal said after a press conference announcing a major expansion of AirWatch’s operations in the Atlanta region.

Deal said that the parties have agreed to a 15-day period of silence as they explore the various options to build a $1 billion retractable roof stadium adjacent to the Georgia World Congress Center.

Initial polls have shown that there is not much support to fund a new stadium partly with public dollars. Members of the state legislature so far have been lukewarm to support a stadium deal given the public sentiment.

But a more recent WXIA poll released on Jan. 18 showed that if building a new stadium is the only way to keep the Falcons playing in downtown Atlanta, it had the support of 54 percent of those polled with 37 percent opposing it.

Deal also confirmed that one option being explored is the possibility of the City of Atlanta issuing up to $300 million in bonds for the public-funding portion of the deal. The Atlanta Falcons and the National Football League would be responsible for pay for the balance of the project including any possible cost overruns.

“I don’t have any assurance that we can do that (bypass the General Assembly),” Deal said. There is the issue of the City of Atlanta’s bonding capacity as well “as other implications.”

Once the bonds were paid, the new stadium would belong to the public — most likely the state or possibly the state with the city and/or Fulton County.

“There’s always going to be a linkage between the Congress Center and any new stadium,” Deal said.

The legislature, during the 2010 session, approved extending the City of Atlanta’s hotel-motel tax to either renovate the Georgia Dome or build a new stadium — as long as it is built on land owned by the Georgia World Congress Center Authority.

That hotel-motel tax, which also applies to hotels and motels in unincorporated Fulton County, is expected to generate about $300 million. Currently, the GWCCA has a $200 million bonding capacity that was used to build the Georgia Dome more than 20 years ago. But the governor said it is not clear whether that $200 million bonding capacity could be applied to the new stadium without having to be approved by the legislature.

“It just depends,” he said. “Those are the kind of things we have to explore.”

The governor said that one possibility would be to see if there was a way to revise the $200 million GWCC bonding capacity so that it would operate as a line of credit for the convention center rather than earmarked for the Georgia Dome. “That is one possibility,” Deal said.

The governor also made a point to emphasize that hotel-motel taxes belong to the local jurisdictions that collect the tax, and the City of Atlanta’s hotel-motel tax was “going to be the only source of revenue” from public dollars for the new stadium project.

“There are some hard choices we’ll have to make,” Deal said. “This (the new stadium) is one that has significance for the entire State of Georgia.”