To say that Sidney Poitier was the Jackie Robinson of Hollywood is just a beginning.

At least Robinson was allowed to play full out every time he took to the field. Poitier had a different burden. Imagine being typecast as a role model for your entire race. Imagine having to be saint-like every time you stepped in front of a camera. As the actor himself put it, imagine “representing 15, 18 million people with every move I made.” 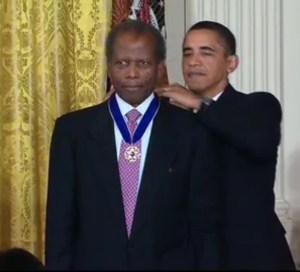 It may be impossible to understand Poitier’s extraordinary career without understanding the context within which it took place. He came along when Jim Crow was still in full force. When the majority of roles for Black men were Stepin Fetchit stereotypes. A heroic Black man on screen? Dream on.

Yet here was Poitier, impossibly handsome, impeccably well-spoken (after, apparently, some hard work on his Bahamas accent). Yes, the very essence of the so-called “Noble Black Man.”

Yet time after time, Poitier brought humanity to the cliché, a touch of humor to the stereotype. In a sense, Poitier walked so Denzel Washington and Chadwick Boseman and Morgan Freeman and dozens of others could fly.

Poitier built up a respectable resume throughout the ‘50s.  Whether chained to Tony Curtis in “The Defiant Ones” (his first Oscar nomination and the first for a Black man) or crippled on Catfish Row in “Porgy and Bess,” Poitier could be counted on to deliver a fleshed-out performance despite the limitations of his role.

In 1963, he became the first Black man to win an Oscar for his portrayal of an easy-going handyman helping out some Mittel European nuns in “Lilies of the Field.” In 1967, he had three smash hits: “Guess Who’s Coming to Dinner” (as an upstanding doctor engaged to a white girl whose parents were the formidable Spencer Tracy and Katharine Hepburn); “In the Heat of the Night” (as an upstanding Philadelphia detective confronted by a Southern redneck sheriff, Rod Steiger); and “To Sir, With Love” (as an upstanding teacher faced with unruly Brit teenagers).

Ironically, 1967 was also, in a way, the apotheosis of a kind of paternal white liberalism. The next year would bring the assassinations of Dr. Martin Luther King Jr. and Robert Kennedy, the upraised fists of the Olympics and the ascendance of the Black Panthers and the “Black is Beautiful” movement. Poitier’s charismatic egalitarianism (or, perhaps more accurately, exceptionalism) went out of style. 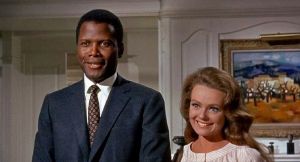 Yet he handled the transition with his usual grace. He paired up with other Black actors. He directed. He was showered with awards.

It could, perhaps, be said that Poitier’s career was designed more to assuage the collective conscience of white liberals. Six Degrees of Separation” (Will Smith’s first major movie role) to see what I mean. But still…that’s no small accomplishment. And if you were Black in the ‘50s and ‘60s, his very presence must’ve meant something (I wasn’t, so I can’t know).

As Poitier himself said in 1967, “If the fabric of the society were different, I would scream to high heaven to play villains and to deal with different images of Negro life that would be more dimensional…But I’ll be damned if I do that that this stage of the game. Not when there is only one Negro actor working in films with any degree of consistency.”

Yes, times have changed. Not enough, but some. And Sidney Poitier was essential to that change. As Ava DuVernay said, “Rest in triumph, Mr. Poitier. Thank you forever.”

Previous Article
Brad Currey (1930-2022): an Atlanta leader like no other
Next Article
Would Buckhead cityhood worsen housing affordability?

‘The Lost Daughter’ – a character study of motherhood is a must see movie
Eleanor Ringel December 20, 2021 2:55 pm