It’s hilarious – and ultimately quite sobering.

Steve Coogan stars as the aptly-named Sir Richard McReadie (tabloid-dubbed McGreedy), a vain, selfish, manipulative fashion tycoon who made his fortune thanks to questionable wheeling-dealing and sweatshops in Sri Lanka. 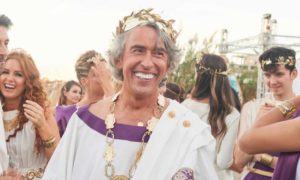 A scene from “Greed”

For entertainment, Elton John, if they can afford him; Tom Jones if not. “It must be costing a fortune,” notes his tough-minded Irish ma (Shirley Henderson).

Interspersed among the lavish preparations (what are they to do about the unsightly Syrian refugees ruining the beach view) is a brief history of the birthday boy’s rise from privileged twit to obnoxious zillionaire. Through the eyes of his bearded biographer (David Mitchell), a man who’d be much more comfortable writing about George Bernard Shaw, we see how McReadie turned failure into triumph as he bullied his way through bankruptcy and bad press to the top of the rag trade.

Yet it’s not all fun and games.

A Triangle Factory-type fire in Asia will have repercussions down the road. And McReadie’s personal life is in shambles. His smart, sexy ex-wife (Isla Fisher) seems to have things in hand (her own mega-yacht anchored in Monaco). But their daughter is a bargain-basement Kardashian (oxymoron?) with her own reality show, “The Young, the Rich and the Beautiful.” Their son is a run-of-the-mill druggie-wastrel who, nonetheless, will have a considerable impact on Daddy’s big day. 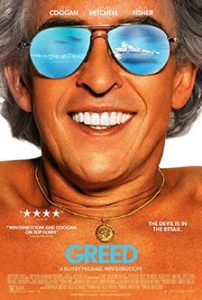 Coogan, with his too-white teeth and too-coifed “windblown” hair, is marvelous, as is everybody in the eclectic supporting cast. Granted, the movie isn’t especially subtle; nor does it try to be. It’s more like a romp through the abuses of the rich and infamous, with a whiplash turn-around at the end.

Director Michael Winterbottom long ago established his political bonafides with the superb “Welcome to Sarajevo,” as well as his sympatico relationship with Coogan in the equally marvelous “Tristram Shandy: A Cock and Bull Story.”

Together, the pair might be a little too goofy, a little too mutually enamored. But as I said, “Greed,” much as it bounces merrily about, also has bite. And you have to have a certain respect for a film that tries so hard to do the work for you.

“Greed” will open this Friday, March 6 at the Landmark’s Midtown Art Cinema.