Greenspace to be installed atop site of razed Georgia Dome, to serve as parking, recreation 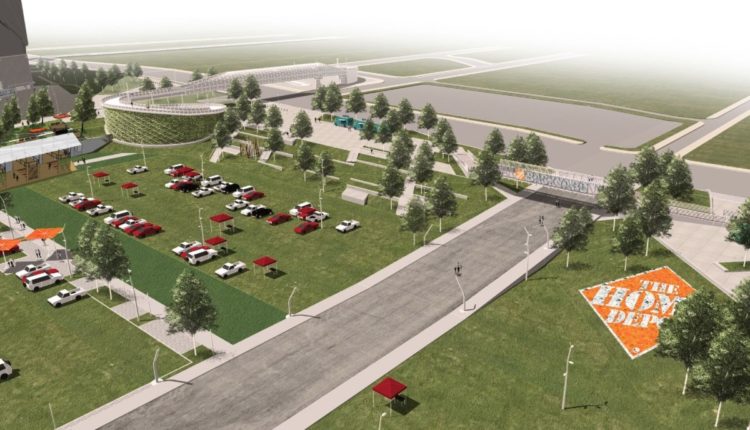 Renderings show a 13-acre grass-covered area that is to serve as a parking lot on game days and for recreation, entertainment and relaxation when it's not needed for parking. Special

Once the Georgia Dome is demolished and the site converted to parking for the Mercedes-Benz Stadium, it will be a 13-acre greenspace named the Home Depot Backyard. The park will be open for everyday access and host special events on game days and throughout the year, civic officials announced Friday. 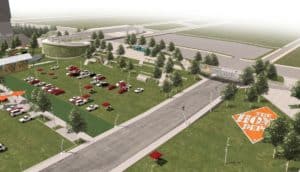 Renderings show a 13-acre grass-covered area that is to serve as a parking lot on game days and for recreation, entertainment and relaxation when it’s not needed for parking. Credit: The Home Depot

Home Depot Backyard will almost double the amount of new greenspace that’s to be provided within a few blocks of the Mercedes-Benz Stadium. Construction is to begin in May on the 16-acre Rodney Cook Sr. Park, which abuts Joseph E. Boone Boulevard a few blocks west of Northside Drive.

Activities at the Home Depot Backyard are to be coordinated by Latonda Henderson, who has been named director of community activation for Mercedes-Benz Stadium.

“The Arthur M. Blank Family Foundation is committed to fostering a new era of community engagement in Atlanta, and enhancing the fan experience at the new Mercedes-Benz Stadium,” Henderson said in a statement released by Mayor Kasim Reed’s administration. “I look forward to working with partners to activate exciting programs which will extend beyond the stadium and lift up the communities and neighborhoods in the area and citywide.” 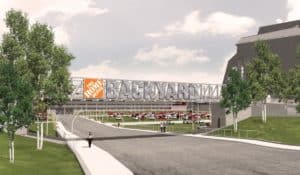 Mercedes-Benz Stadium has appointed a director who’s to create community-oriented programs at the Home Depot Backyard through partnerships with the The Home Depot Foundation and other nonprofit entities. Credit: The Home Depot

Home Depot Backyard is to be used for game day parking for the Atlanta Falcons and United. Beginning in 2018, it is to serve as a venue for arts and cultural events, entertainment, and community events.

Demolition of the Georgia Dome has been posted so it can serve as a backup facility in the event construction delays at the Mercedes-Benz Stadium are not resolved before the Falcons host its home opening game against the Green Bay Packers on Sept. 17.

Design details and potential facilities for Home Depot Backyard were scant in an announcement that focused on the creation of the park. Reed heralded the greenspace as a significant step in refurbishing the Westside.

“My administration has made it a priority to revitalize Atlanta’s Westside and has worked to bring new public and private resources to support economic and civic development in the area,” Reed said in a statement released by his office. “The Home Depot Backyard is yet another example of the City of Atlanta and its vital partners’ commitment to West Atlanta, and will serve as a gateway to Downtown, to our cultural district and to the world’s greatest sports venue, Mercedes-Benz Stadium.”

Falcons team owner Arthur Blank characterized the park as part of a broader effort to revitalize Downtown Atlanta and promote a sense of community in the Westside.

“Mercedes-Benz Stadium will be one of the finest sports and entertainment venues in the world, and more importantly, a catalyst for transformation in the surrounding neighborhoods of Atlanta’s historic Westside,” Blank said. “We are proud to have it grace the iconic skyline of downtown Atlanta, and we are even more proud to have a partner in The Home Depot to help us create a space that will drive connectivity and community engagement between the Westside, downtown, and all of Atlanta.”

Craig Menear, chairman and CEO of The Home Depot, portrayed the park as a continuation of the company’s commitment to Atlanta.

“While we have stores across the country, Atlanta is our hometown, Menear said. “We are proud today to share our long-term commitment to both Mercedes-Benz Stadium and our neighbors in the Westside. Fans and community members are going to have the best backyard in sports. Beyond the stadium, we continue to work with partners like the Atlanta Beltline, Habitat for Humanity, HouseProud and many others to revitalize outdoor spaces and perform critical home repairs in the Westside – part of our commitment to giving back to our communities.”

Note to readers: To see more images and to watch a video of the announcement, click on: